“Feels like it stepped in dog doo-doo but doesn’t know it.”

Writer-director Woody Allen (“Sweet and Lowdown”/”Shadows and Fog”/”The Curse of the Jade Scorpion”), in this sub-par romantic comedy, never comes up with a story line that works and then tosses out only a few acerbic one-liners that land on the money to save the film from being knocked out cold before the third act.

Woody finally gets to the moldy screenplay he thirty years ago wrote for Zero Mostel. It wasmore unpleasant than pleasant sitting through this dated 92 minute diatribe by Larry David, playing the embittered cranky genius old Jewish curmudgeon physicist Boris Yellnikoff, Woody’s alter ego. Boris has a limp from a failed suicide jump out a window and an arrogance befitting someone who thinks he’s figured it all out and no one else has. The David character dishes out a series of strained rants on the meaningless of existence, the stupidity of mankind, that everyone but him is a “brainless inchworm,” that we have created a “failed species,” that God is at best only a decorator, the hypocrisies of both liberals and conservatives, the insanity of the NRA, the foolishness of those who believe love is the end all, and the empty promises of organized religion. The rant is aimed at the audience, as David turns to look into the camera, and a long list of undeveloped characters who are brought into the picture to be insulted and take it like someone around Don Rickles is forced to. It pushes hard in its belief that chance plays the most important part in one’s life and that the best one can do in such a hostile universe is try any way one can to get some happiness, because in the end one only dies and it’s all over. Boris kvetches throughout, wallowing in his whiny misanthropic humor. But, after the rant goes relentlessly on and on, there’s an unwarranted happy ending, which is just as unconvincing as its prior bleak message.

The elderly Boris, once an eminent Columbia University quantum mechanic’s professor, lives alone in contented misery in a shabby Chinatown walk-up apartment after his divorce from his brilliant perfect wife and earns a few shekels teaching chess to children in the park he takes great pleasure insulting by calling them “submental cretins” and hanging out with his friends to grouse about humanity’s inadequacies. At his doorstep, pretty, naïve and simple-minded runaway from Mississippi, Melodie St. Ann Celestine (Evan Rachel Wood), talks the reluctant Boris into letting her stay in his pad until she gets a job. He verbally abuses her and rattles on about his superior knowledge, which she accepts because she now feels under his mentoring that she’s come a long way from being an empty-headed beauty pageant contestant without a formal education. Their platonic relationship ends in marriage, as Melodie confuses father figure Boris for the love of her life and he’s gratified that she parrots his jaundiced words of wisdom.

At this point the pic takes a decided downward turn, as Melodie’s conservative devoutly religious mom, Marietta (Patricia Clarkson), tracks her down and pushes her to meet a handsome young actor (Henry Cavill) living in New York but born in the south. Also showing up is her conservative dad (Ed Begley Jr.), who left mom for her best friend and now discovers he loves a man (Christopher Evan Welch). Whatever worked in the first 40 minutes, no longer works, as all the Southern rubes suddenly change due to living in sophisticated Manhattan and go from obnoxious Bible-thumpers to carefree bohemians and the film feels like it stepped in dog doo-doo but doesn’t know it. 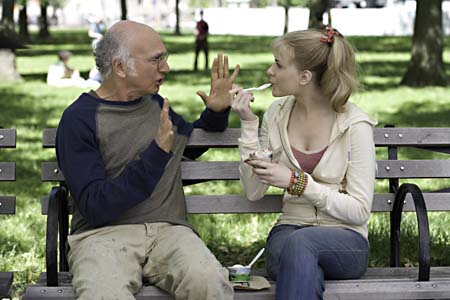