“An amusing and poignant spoof on Tokyo’s bourgeois.“

Yasujiro Ozu’s (“A Mother Should be Loved”/”Late Spring”/”Equinox Flower”)second sound film, one where he finally accepted that talkies were here to stay. It’s an amusing and poignant spoof on Tokyo’s bourgeois.The film centers on the affluent genial professor of medicine, Dr. Komiya (Tatsuo Saito), and his relationship with his overbearing socialite wife Tokiko (Sumiko Kurishima). Their lives are upset with the visit of their spoiled teenage niece, Setsuko (Michiko Kuwano), from Osaka. Saturday is when the bossy wife wants hubby to get exercise by golfing in Izu, where he stays overnight. But Komiya doesn’t care for golf and doesn’t have the stomach to tell his wife this. So he instead drops his clubs off at the apartment of his student assistant Okada (Shûji Sano) and goes drinking at a Ginza bar. The bar is called the Cervantes Bar and its sign says “I drink upon occasion and sometimes upon no occasion”-Don Quixote. Setsuko sneaks out of the house and traces uncle there, and then insists he take her to a geisha house. When she gets drunk, the professor has Okada drive her back, while he sleeps at Okada’s. The wife discovers hubby lied about playing golf and the henpecked hubby slaps his nagging wife, after encouraged by Setsuko to show her who is the boss. It turns out that was just what the doctor ordered, as Tokiko respects his manliness. Both Setsuko and Komiya make their apologies to Tokiko, who accepts them and things return to normal. Komiya explains his philosophy is to allow the wife to think she’s in control, but in reality he is in charge. It’s further explained that it’s like scolding your child by praising him, thereby both parties are treated with mutual respect. We then see Setsuko on a date with Okada, with the cheeky progressive gal saying when they’re married that’s a good way of getting along. The closing scene has Setsuko already departed for Osaka by train, and Komiya and Tokiko getting ready for a hot night in the bedroom. 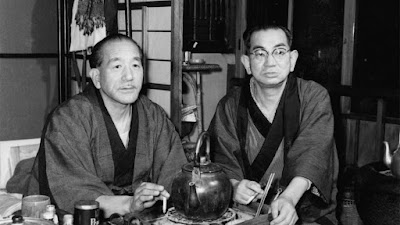