“What makes this film special is the virtuoso performance of Chaney.”

Tod Browning (Dracula (30)/Freaks (1932)/The Unholy Three (1925)/ The Blackbird (1926)/ The Road to Mandalay (1926)/Devil Doll (1936)) has a long and distinguished career in motion pictures. His predilection is for most of his heroes to be deformed or have suffered heavily at the hands of another. They must face the conflict between the better and worse sides of their natures, which are usually split into two identities.

Zanzibar opens in a London Music Hall with Phroso (Lon Chaney) the magician placing a skeleton inside a coffin and when he opens it again there is his lovely wife Anna (Jacquelin). She is part of his illusion act. But she will break his heart, having fallen in love with a handsome African ivory trader, Crane (Lionel), who is seen by him kissing her backstage. She couldn’t bear to tell her kindly husband that she is running away to Africa with him and so the brusque Crane says, I’ll do it. In his confrontation with Phroso, he accidentally pushes the magician over the balcony crippling him. Phroso’s back is broken and his legs become useless.

When Phroso is told some years later that his wife has returned with a child and is in the local church he crawls like a baby to her side as she is lying dead, in front of the statue of the Virgin Mary. He vows to the Virgin to get revenge on Crane and his wife’s brat daughter, whom he decides to raise in a hateful way.

The scene next shifts to the Congo eighteen years later and the area west of Zanzibar, where Phroso assumes the name of Dead Legs and has changed into a lecherous, embittered, and ruthless man, surrounded by drunken henchmen. His followers include a drug-addicted doctor (Baxter) and two strong-armed men to carry out his nefarious work, Tiny (Tiny) and Babe (Kalla). Phroso is now an African trader and he keeps the cannibal natives under his control by using illusionary tricks, where he dresses up in a mask and tells them he is a god who can keep the evil spirits away.

Phroso begins to exact his revenge by hatching a plot to rob ivory from a trader, Crane, and to have him and the girl, Maize (Mary), brought to him. She is the daughter his wife gave birth to and unbeknownst to her, he is the one who had her raised by a madame and kept her working in a dive as a prostitute.

When arriving in his jungle retreat she witnesses a ceremony according to the cannibal custom, that when a man dies–they always burn his wife or daughter with him. That is the law of the Congo.

Phroso is stunned when Crane tells him that the girl couldn’t be his daughter because Anna refused to run away with him after that incident, therefore she must be your daughter. But it is not possible for Phroso to stop the natives from carrying out their custom, since they would never believe him now after he told them that Crane was her father and that he should be killed by them to bring away the evil spirits.

The film treats the natives as savages who are inferior to even the white rabble (who are merely mercenaries, thieves, and drunks). What makes this film special is the virtuoso performance of Chaney, who transforms himself from a meek into a fearsome character, whose expressive face keeps changing with his different moods. He could be tender and fatherly at one moment and the next be menacing.

Chaney’s pantomime skills were learned from childhood, where he had to learn how to communicate with his deaf parents. He also has a flare for wearing just the right makeup; here he looks almost bald, giving him the extra chilling look. Chaney’s specialty in the grotesque made him a silent star icon, someone who could get the audience’s attention by either inspiring them with the vulnerability of his character or by his morbid portrayal of his character. The film is a strangely curious relic. It should be noted that Chaney’ wife, Hazel, had earlier been married to a legless man.

Kongo(32) was a remake with Walter Huston. 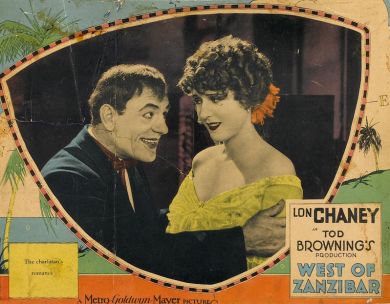