Fritz Lang’s (“The Return of Frank James”-1940) second color film and second Western is loosely based on a story by Zane Grey. It greatly satisfies even though the German emigré director is out of his usual claustrophobic interior element by filming in the wide-open spaces of the west. Western Union’s message is wired in the form of an action-packed western about laying the cross-country telegraph lines from Omaha to Salt Lake City and the dangers faced from thuggish white men parading as Indians to superstitious Indians blocking its construction. It’s set during the Civil War, sometime in 1861.

Bank outlaw Vance Shaw (Randolph Scott), on a chance encounter in the wilderness while fleeing alone from the Omaha posse, rescues an injured Western Union surveyor Edward Creighton (Dean Jagger) and after stealing his horse (because his horse pulled up lame) drops the dude safely off at the stage depot. The next time they meet is about a year later, and Edward as chief engineer for the fledgling telegraph company hires Vance as a scout and ignores his past as an outlaw. Richard Blake (Robert Young) is a tenderfoot from the east who is hired as a surveyor because his rich and famous father invested $50,000 in the telegraph company with the stipulation that they give his son a job so he can learn how to become a man. Edward’s sweet single sister Sue (Virginia Gilmore) works in the office, and becomes the romantic interest of the two rivals. There are a number of other colorful characters on the construction site, including the comical cowardly cook Herman (George “Slim” Summerville), the charismatic tobacco chewing ornery assistant scout Homer (Chill Wills), and the unflappable company doctor (John Carradine).

Vance wishes to go straight and turns his back on his former Missouri gang led by his evil brother Jack Slade (Barton MacLane), who tries to recruit him to rejoin their outfit. The gang wishes to line their pockets with easy money by stealing from the line and because they also sympathize with the Confederacy, they work to make sure the line is not completed. They dress up as Indians to rob the line’s cattle and later rustle their horses, after getting the Indians drunk to cause a diversion, and finally burn down the line’s main campsite.

By the conclusion there’s the inevitable shootout confrontation between the good and evil brothers, who have taken opposite sides and can no longer compromise their beliefs because of blood ties.

The film is best noted for cinematographer Edward J. Cronjager’s remarkable 180-degree pan shot which begins at a cut telegraph line and slowly moves through the hilly desert landscape stopping to focus on a coil of wire with an arrow through it, and then suddenly the camera pans to a tribe of hostile Indians surrounding the Western Union workers. 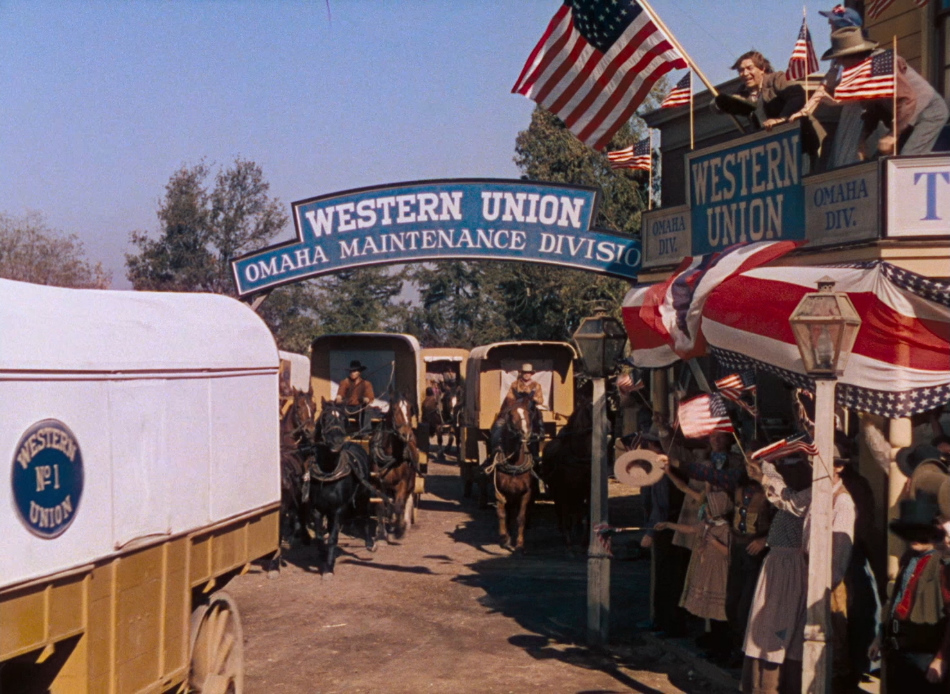