“The apolitical film serves us well for its candor.”

It won for best documentary at the Tribeca Film Festival. Deborah Scranton is a journalist who was allowed embedment with a unit from the New Hampshire National Guard. To get their personal slant on things, she gave small digital video cameras to three members of the 172nd, Sgt. Zack Bazzi, Spc. Mike Moriarty, and Sgt. Steve Pink, as they trained in Fort Dix before they were deployed to Iraq in early 2004, and asked them to record their experiences over there. Scranton then edited their footage that included them on their mission (stationed in a tent city camp near Baghdad–in the Sunni Triangle–that is among the most frequently attacked bases in Iraq; the guardsmen’s mission is protecting supply truck convoys operated by KBR (Halliburton)–which calls for speeding through traffic in their armored vehicles while trying to avoid attacks from the insurgents (such as an IED or RPG) and traffic accidents). There’s also the usual anxiety-ridden interviews with their families and girlfriends at home, and on their return home there’s a follow-up to any mental or physical problems that are still lingering in their re-adjustment to civilian life.

Moriarty, at 34, a family man with one child who had worked as a forklift operator before being laid off, describes himself as a super-patriot who reacted after the 9/11 attacks by volunteering to go to Iraq to get payback. The gung-ho Moriarty speaks bitterly of his war experience, disappointed they couldn’t kick-ass but still states he supports the war effort to get the bad guys but would not re-enlist even “if they paid me half a million dollars.”

Pink is a carpenter and aspring writer who joined the Guard to help pay for college. The twentysomething grunt has a live-in girlfriend back home in New England. He kept a diary, and on camera displayed a grisly sense of humor and open anger about events and says let’s do the war right: “We’re not the Peace Corps.” Pink believes the fight in Iraq is about the oil and believes that’s a good enough reason.

Bazzi, at 24, is a Shiite Muslim whose family are immigrants from Lebanon. He’s fluent in Arabic. At the end of his mission is sworn in as a citizen. He previously served in the U.S. army in Bosnia, and though a college student he loves being a soldier because of the travel. He plans to re-enlist even as he expresses doubts about this being the right war and of the inhumanity of some of his fellow soldiers expressed towards all Iraqis. Though he remains indifferent to the war, his worried doting mother is disappointed he volunteered, especially, when the family left Lebanon during its civil war and can’t see going back to the Middle-East to fight another war.

These three soldiers from the same unit have different views on this unpopular Bush War. As the insurgency begins to kick into high gear, these soldiers as well as the viewer are left wondering what our troops are doing there except making money for Halliburton, as this war seems unexplainable (with no clear-cut aims or reasons stated why we are fighting) even to those who want most to believe they are doing the right thing by serving in Iraq. What the grunts all seem to convey (Bush supporters as well as foes), is that things are not going as well as the administration would like us to believe–in fact they are grim. The apolitical film serves us well for its candor and letting us get a first-hand look at what a mission is like in Iraq (as seen through the eyes of the grunts and filmed by them) and what’s the mind-set of someone who would volunteer for such a problematic war. 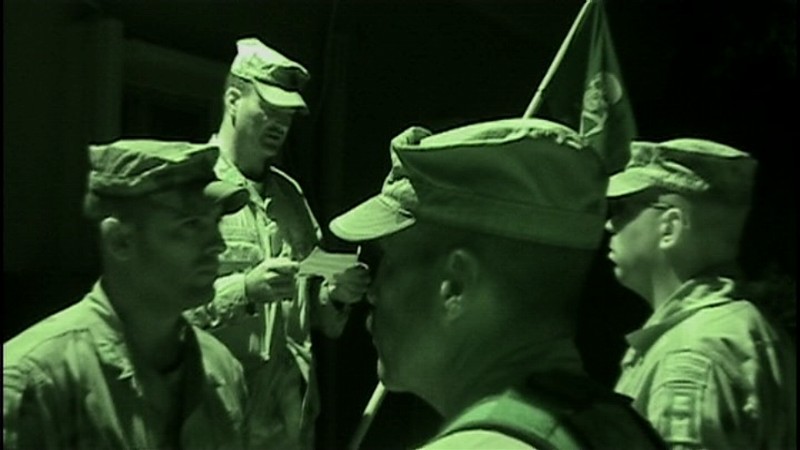