A goofy, campy stylized exploitation pic about urban gang violence, that has become a cult classic and though unduly violent, preposterous and mindless is still enjoyable as a visual experience, for its odd colorful costumes and that it dares be so wacky. It’s a film that’s shot comic book style and is cartoonishly violent, insanely moody and pointless. Director Walter Hill (“Streets of Fire”/”The Driver”/”48 Hours”) swings for the fences and ends up on second base with a very 1970s’ looking film that shuns reality to shoot for a fantasy depiction of gangs. It’s based on the 1965 novel by Sol Yurick, and is written by Hill and David Shaber.

All the major hundred gangs in New York City send nine unarmed reps to convene for a summit in a Bronx park with Cyrus (Roger Hill ), the magical president of the city’s most powerful gang, the Gramercy Riff, calling for a truce among the boppers and for all the gangs to unite as one to take over the city. The charismatic outlaw tells his fellow boppers “The future is ours, if you can count.” He then tells them there are only 20,000 police but 60,000 gang members, and he asks them “Can you dig it?” Before Cyrus finishes his gang unity speech a psychopathic member of the Rogues, Luther (David Patrick Kelly), fatally shoots him without a reason and unfairly blames the vest wearing leather-clad gang from Coney Island, The Warriors, as the ones responsible. The marked gang then becomes the target of every gang in the city and their moves are reported over the airwaves by a female D.J. (Lynne Thigpen), as the Gramercy Riff monitor The Warrior’s retreat home. The unarmed eight-man Warriors have a feud over leadership between Ajax (James Remar) and Swan (Michael Beck), as their leader Cleon (Dorsey Wright) never made it out of the park. Swan proves the tougher and leads his soldiers on a long nighttime subway ride back to Brooklyn. Along the way there are lots of gang fights on the subway stations, the streets and in Central Park (with gangs such as the Orphans, Baseball Furies, The Lizzies (a female lesbian gang), and Turnbull A. C.). The marked gang also must elude the cops. When a slutty loudmouth, Mercedes (Deborah Van Valkenburgh), looking for action, deserts her hometown wimpy Bronx gang for The Warriors, she hooks up with the always pissed Swan in a romance from hell, as each is attracted to each other but can only express affection with hateful diatribes.

The acting is wooden and the dialogue is brutal. The classic storyline is not on par with Homer’s classic journey home, The Odyssey, or with Xenophon’s tale of Greek tragedy of an army caught behind enemy lines. But it caught the public’s attention with negative publicity because of stirring up real gang violence in theaters, and should go over well for those who prefer the classics when dumbed down to the everyday world of trivialities. The A&M soundtrack features tunes like “Nowhere to Run” and “In the City,” and this pulsating music keeps the teen flick going around like the Ferris wheel in Coney Island during the summer. 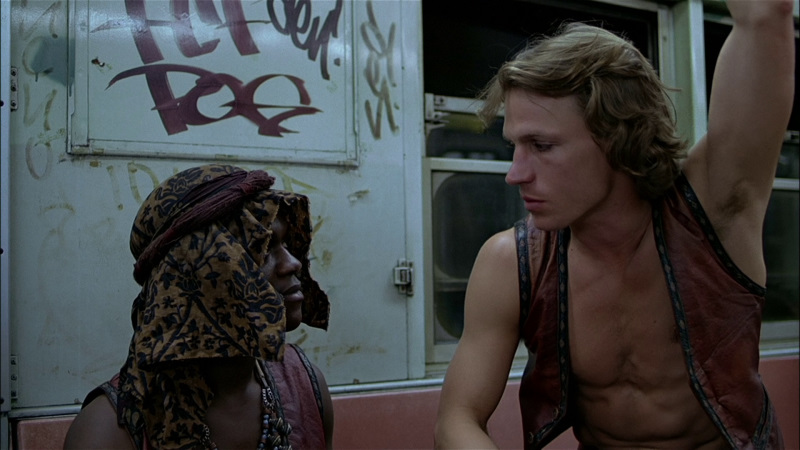