“Its most rewarding moments being the well-choreographed brutal MMA fight scenes.”

An old-fashioned pugilistic melodrama, about the new sport of mixed martial arts (MMA)–Ultimate Fighting.With its most rewarding moments being the well-choreographed brutal MMA fight scenes. Director Gavin O’Connor (“Miracle”/”Pride and Glory”/ “Tumbleweeds”)keeps things predictable, clichéd and offers bogus life lessons about being contrite and fighting back against all odds. Writers O’Connor, Anthony Tambakis and Cliff Dorfmankeep it crowd-pleasing simplistic, up-to-date in current events by using as background material the failed Iraqi War and the economic downturn caused by Wall Street greed putting a big hurt on the working-class, and by firmly grounding the formulaic sports story in the tried and proven way of the underdog as the hero. It offers an uneven screenplay, with trite dialogue, that is moving in a primal way. It gets its body blows in by the English and Aussie leads, playing Irish-American boxers and delivering forceful performances.

Tommy(Tom Hardy, Englishman) shows up at his high school wrestling coach widowed father Paddy’s (Nick Nolte) doorstep of his modest Pittsburgh home after disappearing for the last 14 years and is surprised, but not particularly pleased, his estranged abusive neglectful dad has sworn off booze and is an apologetic reformed man. Not able to forgive dad for cruelly abandoning mom, Tommy nevertheless asks dad to train him to fight for the five million dollar prizefor Sparta, in a MMA winner-take-all tournamentin Atlantic City. Eventually it becomes known Tommy was a hero marine in Iraq, but is also wanted by the military for being a deserter.

Paddy’s other estranged son Brendan (Joel Edgerton, Australian) is a popular suburban high school physics teacher and a caring family man. Brendan is about to lose his house to foreclosure because he refinanced to pay the medical bills for his daughter’s heart operation and against his wife Tess’ (Jennifer Morrison) wishes, returns to the violent mixed martial arts circuit to get the money, where he used to be a recognized top-level fighter. When Brendan is suspended from his teaching post for fighting in MMA bouts in parking lots, he decides to devote himself full-time to the sport and reunites with his old trainer (Frank Grillo) and enters the Sparta event.

Predictably the brothers beat all the favorites and in the climax they fight for the prize money and middle-weight championship. I tried to have some fun guessing the winner chosen by the filmmaker. But for me, no fan before or after of the barbarian MMA sport, the narrative had the stink of an unrewarding fixed fight and the melodrama had the feel of a Greek tragedy that is presented in a somewhat heavy-handed manner for a modern-day dysfunctional nuclear family. 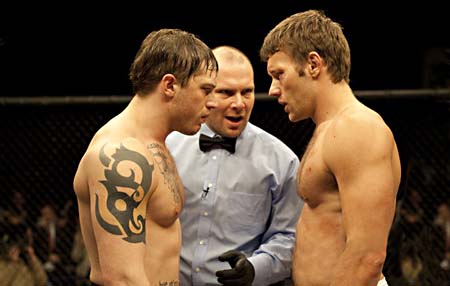 OUTLAW AND HIS WIFE, THE