“A stilted and ponderous epic about Napoleon’s failed Russian invasion of 1812.”

A stilted and ponderous epic about Napoleon’s failed Russian invasion of 1812, that tries hard with its international cast to still seem Russian. It’s based on the Leo Tolstoy tome-like novel, considered by many critics to be Russia’s greatest novel. King Vidor (“Our Daily Bread”/”Duel in the Sun”/”The Big Parade”) robotically directs the spirit out of the novel in his emotionally cold version, but surprisingly keeps it cohesive and faithful to the novel’s plot line. The great silent director co-writes it with a team of writers that include Bridget Boland, Robert Westerby, Mario Camerini, Ennio De Concini and Irving Shaw. The epic didn’t have a prayer to succeed as it’s miscast throughout, especially in the casting of Henry Fonda, the center of the novel, who is hardly credible playing a bespectacled disaffected ineffectual French-Russian aristocratic intellectual liberal philosopher living in Moscow and in search as a civilian of why men go to war. Pierre is captured while witnessing the attack on Moscow, and faces execution.

There are saving graces to this sterile drama when viewed as a spectacle, as the colorful battle scenes at Austerlitz, the retreat from Moscow, the crossing of the Beresina and the Battle of Borodino should awaken those snoozing at the dullish love triangle and all the idle chatter among the Czarists playing out their empty lives as aristocrats back in Moscow.The spirited Natasha Rostov (Audrey Hepburn) is girlishly cute over her amorous interest for the dashing but cold-hearted warrior Prince Andrey (Mel Ferrer, Audrey’s real hubby at the time), whose wife (Anna Maria Ferrero) died at childbirth and was only introduced to her because Fonda felt he wasn’t good enough for her. While Anatole (Vittorio Gassman), Natasha’s unlikely caddish suitor, another example of misconceived casting, almost gets Natasha to run away with him but for Fonda’s interference. Herbert Lom makes for a quizzical Napoleon. Oscar Homolka is a treat as the cunning low-born general. Helmut Dantine personifies the arrogant rakish Russian cavalry officer to a tee, as he fights a duel with the slighted Fonda. And Anita Ekberg is the Ice Queen shrewish wife of Fonda, a role she’s quite capable of handling.

The true value of War and Peace is in the book and if it must be seen as a movie rather than read, then the way to go is with the superior Russian version in 1967. 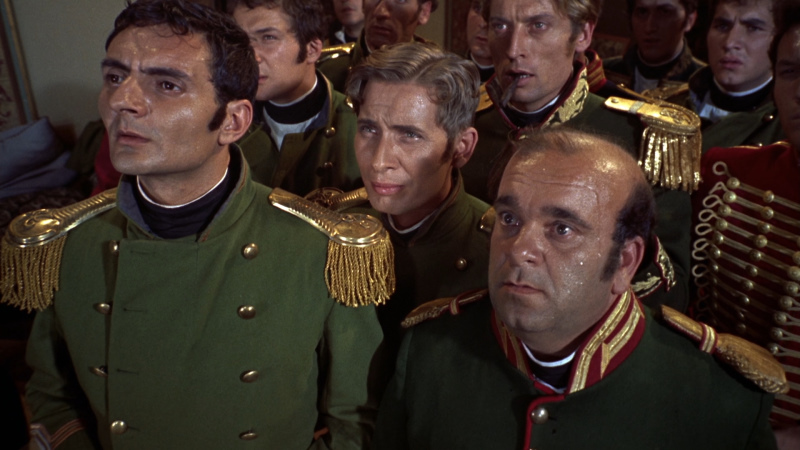