Love saves the day melodrama. The dismal film is worth seeing only for the fine performance of Alida Valli as the rich crippled girl. Robert Stevenson (“Jane Eyre”/”Back Street”/”Mary Poppins”) directs and writer Frank Fenton bases it on a story by Manny Seff and Paul Yawitz. It was filmed in 1948 but not released until 1950. In 1949 the costars, Valli and Joseph Cotton, were teamed in the excellent The Third Man and the studio delayed the release of “Walk” correctly figuring the two would be stars by then. Jack Paar has a supporting role as a factory worker suburban husband, as the future talk-show host does a good job with his minor role.

Chris Hale (Joseph Cotten) is the unemployed drifter who arrives in Ashton, Ohio, to look over the house he spent his childhood that’s now owned by the kindly widow Mrs. Brentman (Spring Byington). She offers him a room and helps him land a job in the shipping department in a shoe factory, where Jack Paar shows him the ropes. Chris visits Elaine Corelli (Alida Valli), the girl he never met but had a crush on her when he was a child newspaper boy to her house. But the society girl is now embittered over being crippled in a skiing accident and has to be in a wheelchair. Her dad (Frank Puglia) owns the shoe factory. The handsome Chris, a career petty thief and card shark, makes a play for Elaine and she finds him to be a charmer and the two begin a romance.

Still thinking of crime Chris flies for the weekend to an unnamed city and hooks up with petty criminal Whitey Lake (Paul Stewart), who calls him “Steve.” The two rob the gambling house owner Bowen (Howard Petrie) of $200,000, and go their separate ways knowing that the crime will never be reported. Chris returns to small-town Ashton and pursues Elaine, and the two eventually fall in love. But Whitey suddenly shows up, broke and scared, and says that Bowen’s on his tail. Chris gets Mrs. Brentman to give Whitey a room, but the small-time hood in a panic for Chris’s share of the loot tears up the room thinking it might be hidden there.

By the third act Cotton is a reformed man seeking redemption for his past sins, and after confessing to Elaine about the robbery and past life of crime he has to deal with the vengeful Bowen and his goons. The uninteresting clichéd resolution, leaves this film flattening out in its noirish aspects to become an unconvincing soap opera love story. 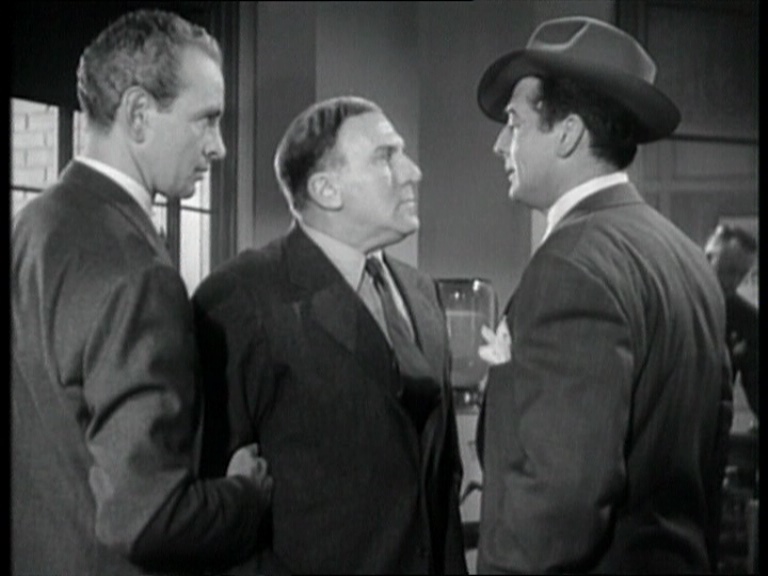