“Cox and writer Rudy Wurlitzer get the politics right, but don’t know how to clearly tell their story without seeming like loonies.”

Alex Cox (“Repo Man”/”Straight to Hell”/”Sid and Nancy”) directs this potentially gripping true tale of a 19th century American adventurer who made himself president of Nicaragua from 1855-57 and was executed in Honduras in 1860 when his repressive regime was overthrown by the people he just freed and he attempted another coup in another land. It demands to be told as nothing more or less than history, but under Cox’s guidance it becomes a muddled hallucinatory ranting biopic that aims to shock and bring home the obvious contemporary parallels with President Reagan’s aggressive meddling stand in Central America in a cartoonish way that causes the ruin of the film. When viewed today, despite Cox’s rantings, it’s just as much a striking observation at W.’s failed lunatic Iraqi War. In both the film and in modern history, the United States is invading an oppressed country to be its liberator under the guise of a godly right to exercise Manifest Destiny to bring democracy to the world. Cox and writer Rudy Wurlitzer get the politics right, but don’t know how to clearly tell their story without seeming like loonies. It’s too bad it’s mishandled, because there’s a lot of meat on the platter if this true story is told as it should be. Only its star Ed Harris, who plays Walker in an understated realistic manner, seems to get what’s demanded of his role. But he seems out of place as everyone else plays it for comic effect, in a tale that gets completely out of whack when it has helicopters swooping down in rescue efforts, even though they weren’t around then, just to make a Vietnam-like political point.

The story is set during the age of the robber barons in the middle of the 19th century; the vulgar wealthy industrialist Commodore Cornelius Vanderbilt (Peter Boyle), played with a gleeful relish by a Boyle who openly farts in public to show he can do whatever he wants because he’s so rich, who for his own business interests finances idealistic soldier of fortune William Walker (Ed Harris), who abandoned careers in law, politics, journalism, and medicine, to take his 58 men ragtag mercenary army (dubbed ‘the Immortals’) into Nicaragua and kick ass in order to stop the ongoing civil war between the liberals and the conservatives and bring stability to the country.

Walker is pictured as a puritan who gets tangled in his own dark forces when his freedom-loving deaf fiancée, Ellen Martin (Marlee Matlin), dies before his mission and he has no one else to turn to for support.

Walker joins forces with the liberals against the country’s corrupt ruler and manages to win despite his losing military campaign. When the politically naive war hero, Walker, installs the greedy liberal general as president, he discovers the general’s plot to eliminate him as a rival and acts first to to execute him and then he proclaims himself president. Walker takes the general’s mistress Yrena (Blanca Guerra), lets the corruption continue as he lines his pockets and disengages himself from his brutal regime by worrying over his portrait and eventually to his ruin by upsetting the Commodore by taking on other business partners.

The dense plot never hits home with much credibility or much impact, as it gets buried under an odd assortment of postdated details it brings into the story from Zippo lighters to a Mercedes limo, just to keep piling on its thematic points over an ongoing failed U.S. foreign policy. What Cox never seems to get in his failed attempt at Monty Python satire, is that the story was all there if he just cut out all the curve balls and threw the straight heaters. 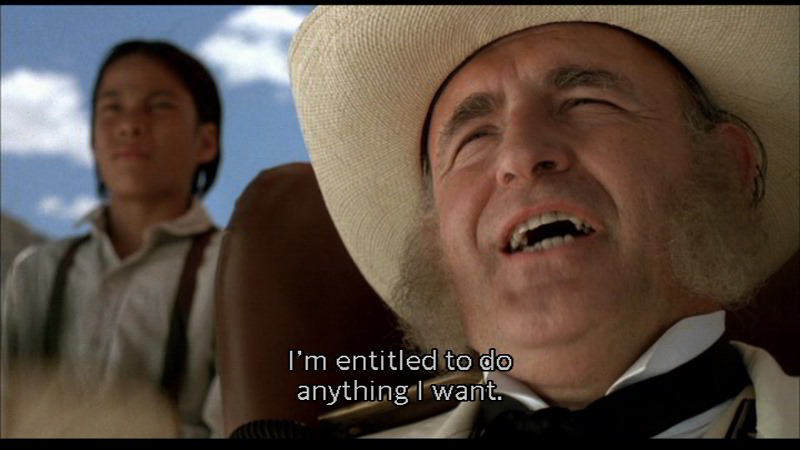