“Strikingly beautiful visual mood piece that resembles in many ways the refreshing intensity of an Ozu family drama.”

West African director Abderrahmane Sissako (“Bamako”/”October”/”Life on Earth”), from Mauritania, helms this strikingly beautiful visual mood piece that resembles in many ways the refreshing intensity of an Ozu family drama. It’s set in the windy desert depot of Nouadhibou, a port village in Mauritania, where many of the natives are just stuck to live out their lives in peace and to “wait for happiness” while others come here only to emigrate to nearby Europe. In Nouadhibou the shoddy temporary dwellings are low-rise, adobe huts with small windows and are given the name “heremakono,” which means “waiting for happiness.”

The film centers around three characters in Nouadhibou: a citified college student named Abdallah (Maata Ould Mohamed Abeid), perhaps Sissako’s alter ego (the director spent six years studying film in Moscow), dressed out of place in European clothes and unable to speak the local Arabic tribal language of Hassanya and therefore is unable to participate in the life of the village while he is visiting his concerned impoverished mother (Fatimetou Mint Ahmeda) before returning to his European college; Maata (Maata Ould Mohamed Abeid), the mysterious wise man electrician of the old-school who is fated to patiently live out his old age in Nouadhibou; and the electrician’s apprentice, a young playful and curious boy of around eight named Khatra (Khatra Ould Abdel Kader), an orphan who was adopted by Maata and it can be assumed is also fated to remain in the dreary hellish village for his entire life but whose soul will remain pure African and not be tarnished by a craving for all things European.

Abdallah remains isolated, except for an occasional language lesson from Khatra, in his dark basement room, where he glumly watches the feet of passers by as they go past his window garbed in their colorful traditional robes. In this manner, he has become entranced with Nana (Nana Diakite), a beautiful woman whose white hubby deserted her for Europe and their young daughter died from an illness, who now earns her living as a prostitute.

Some other villagers include a recluse; a Chinese peddler, and a young girl who is learning traditional songs and to play the kora from an elderly woman who could possibly be her mother (Nema Mint Choueikh). There’s also the incident of a drowned body of a would-be emigrant washed ashore. According to Sissako, the traditional songs are the best of what can be passed on to future generations of Africans, while those who chose exile in Europe are running away from their roots and many will die rootless experiencing another culture but not realizing their own (what remains looming as debris along the shoreline are three wrecked boats, which is framed as a warning to the exiles to be careful for what you wish for).

Sissako, masterfully in a mesmerizing tonal poem way, captures the essence of the everyday life of the villagers. He does it in a slow moving film with sparse dialogue but one that digs deep inside the isolated area and its laconic characters, as it tells us the only two choices of living here are to go with the flow and try to adapt or become an exile. It has a keen droll humor, takes a healthy stab at looking at life’s mysteries, pokes a hole at globalization and cultural uniformity as the villager’s answer to their purgatory, and offers a series of strangely haunting images that cry out for his people to not lose their souls to the former colonizers from Europe. It’s a truly great film by an unknown filmmaker in the West, even though he’s based in Paris, that is moving and poignant in a quiet and sincere way.

Itwon the International Critics Award at the 2002 Cannes Film Festival. 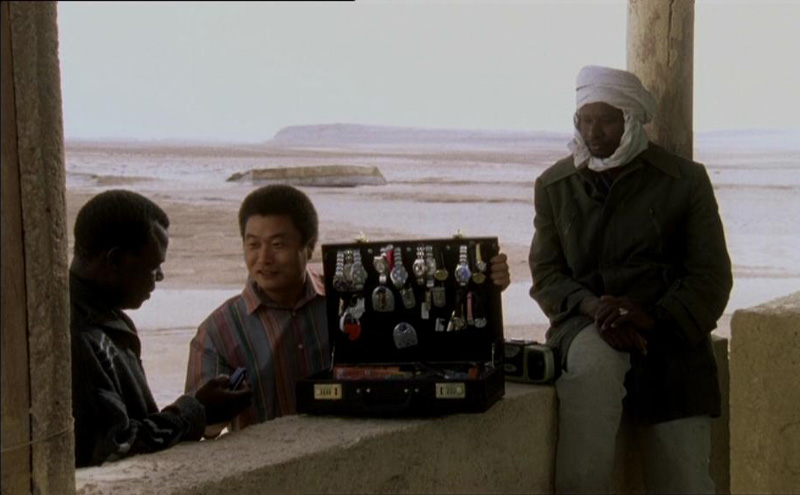