“Played with his usual histrionics by George Arliss.”

An old-fashioned snappy biopic on Voltaire (George Arliss). He was the 18th century French wit, poet, dramatist and philosopher, the spokesman for the common people in the the palace of Versailles in 1762. He was referred to as the great mocker. Played with his usual histrionics by George Arliss, who has played Disraeli, Hamilton, Rothschild, Cardinal Richelieu but none better than Voltaire. John G. Adolfi  (“The Working Man”/”Central Park”) adequately directs this stagey presentation. It’s based on the novel by George Green & E. Lawrence Dudley, and is written by Paul Green and Maude T. Howell.

The writer has a powerful ally in Madame Pompadour (Doris Kenyon), who enjoys his wit and is the mistress of King Louis XV (Reginald Owen). The evil Count de Sarnac (Alan Mowbray), the King’s imperious right hand man, opposes her and the writer’s calls for justice and tolerance in the form of pamphlets distributed to the commoners.

Sarnac frames Calas as a traitor and unjustly charges him with treason and after getting him the death sentence, he then persuades the King it would be a sign of weakness to pardon him. Sarnac gets the wealthy man’s estate, as Voltaire sides with the victim’s frightened beautiful daughter, Nanette (Margaret Lindsay), and protects her by letting her stay in his residence.

Voltaire is banished from the royal court of Versailles after Sarnac accuses him of supplying vital military intel to the Prussian King, Frederick the Great.

When Voltaire convinces Madame Pompadour to let him put on a play for the king to watch in the court, one that stars the beautiful Nanette, he is able to outsmart the wormy Sarnac and get the goods on him as a traitor and thereby restore the estate to Nanette — the estate that’s rightfully hers, and also have Sarnac punished by the King.

Voltaire warns the King to get rid of corruption in his regime and to make the taxes fair, and to rule with a tolerance and a sense of liberty. The celebrated French writer will become the country’s rational voice, someone if listened to could have prevented the later French Revolution.

I think modern day viewers deserve to see at least one quirky Arliss oldie, and I would recommend this one. 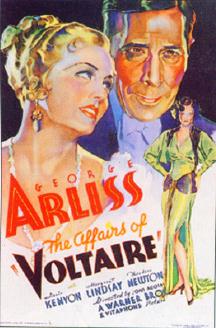