“The film is an evocative visual depiction of a typical suburban family and community.“

An artistically moody puzzler built around the mystery of five sisters in a wealthy small Michigan suburban town who committed suicide twenty five years ago (the story takes place in the 1970s, as evidenced by the background music of Styx and Electric Light Orchestra). The film is narrated offscreen by Giovanni Ribisi, as an adult looking back at that time with the luxury of now having all the physical evidence the locals collected about the girls. The recollections of the girls are by their boy classmates, the ones who lusted after their dream girls. The boys’ perceptions are admittedly drawn from their limited experiences with the girls and from anything they found in the girls’ house afterwards, such as Cecilia’s diary and photos of the girls. It is richly adapted from a Jeffrey Eugenides novel by director Sofia Coppola.

The film is an evocative visual depiction of a typical suburban family and community. It dwells on the sadness found under all the attractive girls’s smiling faces, leaving one with a lingering feeling of helplessness about their situation. Adolescence is carefully scrutinized by Sofia Coppola. She implies that the girls at that time knew more about the boys than the other way around. The boys, except for one, are insecure and clumsy around the girls.

Edward Lachman’s photography has a mesmerizing look, as he seems to have his camera covered with a filter to make the shots appear fuzzy, which complements a story that can’t be completely put together because we don’t know the answers as to why the girls did what they did. All we are left with are some clues to what set the tragedy off and our mind associations take over as we are left trying to rationalize what we can’t understand.

The first Lisbon girl to go the suicide route was the lovely but unhappy youngest one, the 13-year-old, Cecilia (Hanna Hall), who first attempts suicide by jumping off her house roof onto a spiked fence — but fails. She is sent to a shrink (Danny DeVito) for observation. To cheer her up, her very strict Catholic mother (Kathleen Turner) throws her a party in the house. At some point during the party, Cecilia retreats upstairs and succeeds in slitting her wrists.

The distraught father (James Woods), a math teacher in the high school, is viewed as a decent but unassertive weakling. He deals with the tragedy afterwards by watching a baseball game, unable to talk with the girls or the priest who came by to comfort the family.

With the Lisbon girls back in school, one of them, Lux (Kirsten Dunst), gets romantic with Trip (Josh Hartnett) — the school’s ladies man. Their romance is hampered by Mrs. Lisbon not allowing her daughters to go out on dates alone. But Trip comes up with a plan so that all the girls can have dates with his friends and attend the high school homecoming dance together, where Mr. Lisbon will be the chaperone. The promise is made to return before curfew but Trip and Lux get passionately carried away with each other and make it on the football field, thereby breaking the curfew. But Trip leaves her alone in the field and will never see her again after that most perfect night, as he is now interviewed about her as an adult. He says he liked her, she was his dream girl, and can’t explain why he left her.

Mrs. Lisbon goes overboard on the punishment and the girls are indefinitely grounded from all activities and forced to remain home. The emasculated father is overwhelmed by all the women around him and retreats from the crisis he is facing at home, by saying nothing to his wife about the vindictive punishment dished out.

Within a year of the youngest Lisbon’s death, the other four follow suit after sneaking out for a car ride into the early morning hours with the high school boys. The 15-year-old Bonnie (Chelse Swain), hangs herself; the 16-year-old Mary (A. J. Cook) sticks her head in the oven; the 17-year-old Therese (Leslie Hayman) does it by sleeping pills, and the narrator tells us the last one to go was the 14-year-old Lux, who handled her confinement by sneaking boys on the house roof for random sex, as viewed by the neighborhood boys with their expensive telescope.

Despite liking much about the film and respecting the eclectic approach the director used, I still found that this film wasn’t talking to me. I felt I was asked to be a mourner rather than a viewer at a once in a lifetime story that has the possibility to pop up some day on the TV news as one of those bizarre events that just happen without cause; but, the story itself went no deeper than how the TV news would cover it. The exploration of the teens in their growing pains, their ordinary wants, and even in their grandeur, left me scratching my head at this allegorical tale, wondering how it was that the sunshine couldn’t get inside them, why they were symbolically cut down in life like the diseased elm tree in front of their house was. As for the girls aside from their horribly repressed and overbearing mother, Where was the monster lurking in them that made them feel so despondent? I don’t know how much of the girls’ futility I could see; the more I thought about them, the more they seemed like ghosts than real people. They all started looking like each other. I couldn’t distinguish one from the other except for Lux who for some reason in all her boldness and sexuality, strangely couldn’t find the strength to live. Which left me perplexed as to what I was supposed to make of this tragedy. I felt the film kept me purposely at an arm’s distance from the girls and if I tried to know more about them, I would only become like the shrink giving off pat answers to the mystery. I don’t know if this is a good or a bad way for a film to leave the viewer, but I do know I felt something profound was missing. The film was more revealing about the boys and their idealization of the girls than it was about the girls and what they were really like. This seemed misplaced storytelling, since the girls’ story should have been more compelling than the boys’ awkward adolescent tale. What I got out of the story was a look at some of the worst things about life in the suburbs and about awkward adolescent boys only looking at the girls through what they fantasized about them. 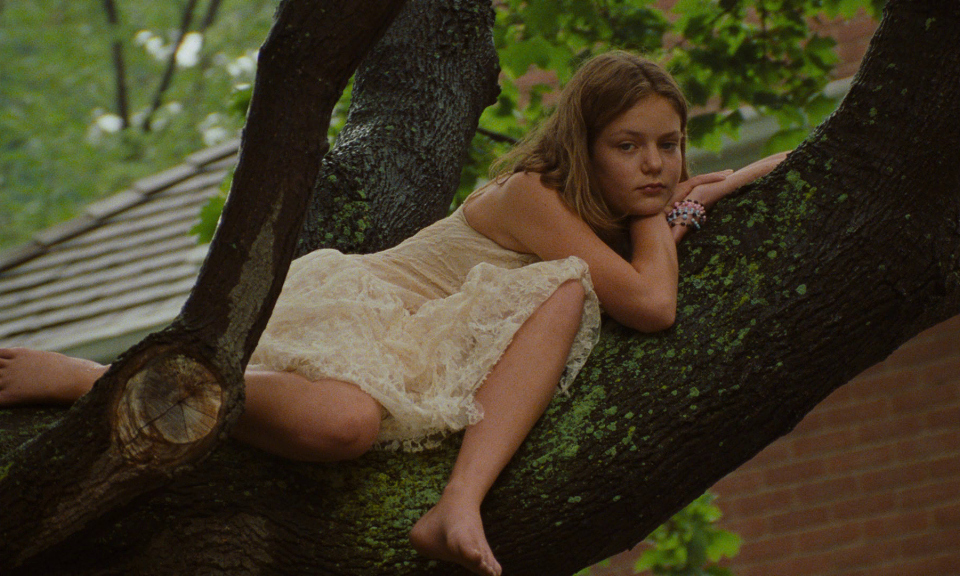