“A landmark film, that helped define the Western hero as the mythical chivalrous man.”

A classic Western based on the 1902 novel by Owen Wister and the story by Kirk La Shelle, with Grover Jones and Keene Thompson turning in the script; it’s the first talkie version after two silent versions. A landmark film, that helped define the Western hero as the mythical chivalrous man. Victor Fleming (“Dr. Jekyll and Mr. Hyde”/”The Wizard of Oz”/”Gone With The Wind”) directs with a lethargic pace, probably stalled over trying to grapple with the new medium of sound. It’s a melodrama/comedy/Western about rivals over a woman and vengeance over a rustling incident, whereby the acting seems somewhat stilted by today’s standards. The film is most remembered for a bar scene tussle over a flirtatious Mexican barfly. The Virginian (Gary Cooper), a Medicine Bow, Wyoming ranch foreman of the Box H whose real name is never given, is insulted by the villainous gambler Trampas’ (Walter Huston) saying to him “When I want to know anything from you, I’ll tell you, you long-legged sonova -“, and the Virginian responds to the villain by pointing a gun at him and telling him “If you wanna call me that, smile.” It was Cooper’s first talkie and paved the road for his very successful career as a big star in all kinds of films.

Molly Stark Wood (Mary Brian) is the cute new genteel Shakespeare lovin’ schoolmarm from Vermont who is not familiar with the West’s rough ways. As soon as she arrives by train in Wyoming, she attracts the attention of the happy-go-lucky drifter named Steve (Richard Arlen) and his boyhood friend, who meet again after not seeing each other for four years, the Virginian (Gary Cooper). It soon becomes apparent that it’s the Virginian she cares for, and an unhappy Steve takes a supposedly poor wage job working for the Box H as a ranch hand. Steve also secretly hooks up with Trampas and becomes part of his rustling ring. When caught by the Virginian branding the Box H cattle with Trampas’ brand, the Virginian lets him go with a warning. The next time the rustlers grab off the best cattle from the Box H and before they can escape the Virginian and a posse of ranch hands catch up with four of the rustlers and plug one and lynch the other three, with the Virginian supervising the hanging. One of them is the likable Steve. When the Virginian carries on his search in the Tetons for Trampas who fled the scene, he’s shot in the back by the rustler but survives as he’s nursed back to health by Molly. She’s disapproving of the frontier justice approach, but when the Virginian heals they plan to marry and go further West, to Nevada or Utah, and build a ranch just like his boss. But on the day before the wedding Trampas returns, and in the same bar that was in the opening scene goads the Virginian into a gun duel at sunset that he can’t refuse or he’ll think of himself always as a coward. Pushing aside Molly’s teary request to just flee, the Virginian straps on Steve’s gun and kills the criminally driven man he detests on Main Street.

The film tries its best to show that this is a good lynching and not a bad one as in The Ox-Bow Incident, because the rustlers operate in a place where there’s no law and order and the good people have to do what’s best to protect their livelihood. This film’s fresh Western conventions at the time would be exploited by the B-Western for the next few decades until the stock situations became almost unbearable clichés. This same theme however was used effectively in an A-Western called High Noon (1952) that also starred Gary Cooper, but a much older hero with a now weather-beaten face.

It was remade in 1946 and starred Joel McCrea, but only turned out to be a standard Western as the plotline became hackneyed. 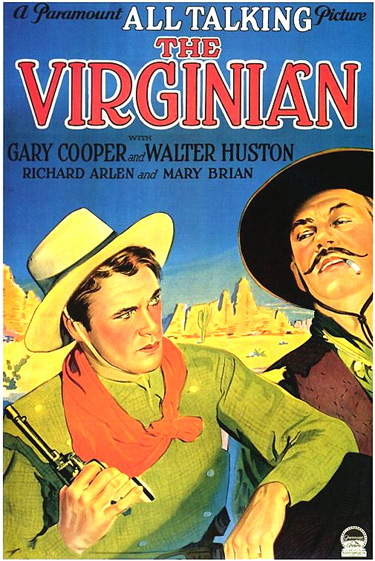 NIGHT OF THE GHOULS