“An impressive debut for Mexican writer and director Francisco Vargas.”

An impressive debut for Mexican writer and director Francisco Vargas, who openly voices his sympathies for the downtrodden peasants in this earnest political drama that soberly tells of the struggle between the impoverished peasants and the thuggish military in the rural Mexico of the 1970s (set in the region of Guerrero). The film was appropriately shot in a silvery black and white by Martín Boege, as everything in this film is stark and either black or white.

It opens not too cheerfully with the following military atrocities: farmers being tortured, their women raped in a barn and their homes torched. It then cuts to three generations of the farmer/musical Hildalgo family who come out of the same hills to hitch a ride in a truck to play haunting folk music in the small town for spare change. The dignified-looking, octogenarian, one-handed Don Plutarco (Don Ángel Tavira, the 81-year-old never acted before) plays the violin (he does it by strapping his bow to his handless stump), his intense guerrilla fighter son Genaro (Gerardo Taracena) plays guitar, and Genaro’s playful young son Lucio (Mario Garibaldi) passes the hat around in the dusty town for the coin. Genaro has come to town on a secret mission to purchase illegal guns from the local cantina and hopes to return with the guns to the guerrilla commander (Silverio Palacios) who is waiting in the hills to launch a counter-attack on the invading army. The trio on their return find that their farming village was the one attacked by the soldiers and the farmers either fled or were killed, and Genaro’s wife and daughter were taken by the soldiers. The army is now stationed in the hills and it’s Genaro’s hope to smuggle the cache of weapons, stored in his cornfields, past the army, but doesn’t know how to manage this. At a checkpoint stop Plutarco, who signed away his life to purchase a donkey from a neighboring village landowner, is detained by the menacing squad captain (Dagoberto Gama), who surprisingly has a softer side as he expresses a love for music and forces him to play the violin. Plutarco obliges, but on the sly plays the dangerous cat and mouse game of smuggling the weapons hidden in the cornfields in his violin case to the freedom fighters as he gets the captain’s permission to check out his cornfields. It leads to tragedy, showing that not even music can tame the savage beast.

The disturbing film about the disenfranchised relies on many close-ups of the weathered face of Plutarco to see the longtime oppression faced by the Mexican peasants. This mostly works, but at times the stylized high art concept clashes with the more moving and involving documentary neo-realism that gives the film its gripping power. Still this film delivers its romantic message about the inevitable struggle between the haves and the have-nots in a lyrical way that one can hear in the background traditional Mexican music and in the strained violin pieces played by the frail but proud and patient peasant resistor. 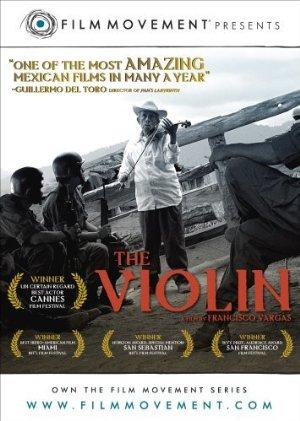 NO MAN OF GOD