“Veers from being risible to sinister as it explores how viewers are brainwashed by TV.”

David Cronenberg (“Shivers”/Dead Zone”/Rabid”) slickly helms this virtual reality sci-fi horror story that veers from being risible to sinister as it explores how viewers are brainwashed by TV, obsessed with technology and exploited by perverse sex. It’s almost totally incoherent, yet it’s always compelling viewing as it moves through tawdry territory of pornography, sadomasochism and snuff films. It plays out as a haunting sci-fi nightmare that has video controlling the lives of people, as if it were a drug or worse.

Max Renn (James Woods) is a cable TV programmer of a small station in Toronto who is besides himself with glee as his loyal technician Harlan (Peter Dvorsky) pirates a broadcast from a satellite television station of a plotless video of pure “Torture, murder, and mutilation” in a program called Videodrome. Since that program grabbed his attention and he’s not worried about legal matters, he tells his business partners that he must have this program for their sleazy cable station and further exclaims ”Brilliant! Absolutely brilliant, and almost no production costs.”

The seedy Max as a panelist on a cable TV talk show about the influence of television tells the viewer his pornography shows are helping to make the world a better place by giving the public what it wants and letting them have these harmless fantasies rather than commit crimes in the real world. Nicki Brand (Deborah Harry, the lead singer of Blondie, in her film debut) is a kinky host of an emotional rescue show, who maintains that the public is over-stimulated; while appearing on tape, Professor Brian O’Blivion (Jack Creley), the McLuhanesque media guru, rails against television being dehumanizing.

The trail of Videodrome leads to Professor Brian O’Blivion’s daughter Bianca (Sonja Smits) who runs the Cathode Ray Mission, an organization that enables derelicts to have access to television broadcasts. She becomes Max’s guide in dealing with the ruthless Videodrome conspiracy people and fills him in on some of the dark secrets about what it did to her father.

The unprincipled Max gets more than what he wishes for, as he comes under the mind-control of Videodrome after watching it. He undergoes hallucinations (not able to tell what’s real) and gets programmed when a pulsing vagina-like slot in his stomach becomes like a VCR and acts as the place where mind-control cassettes are played. The plot line grows increasingly more convoluted and strains any sense of rationality. But it does get through in amplifying Cronenberg’s macabre and misogynistic world visions: recycling his previously stated ideas about bizarre new body orifices, technological conspiracies to change mankind and exploding bodies. It also adds on the Philip K. Dick thoughts of altered reality. The film was ahead of its time, coming out at a time when videos exploded on the scene, and though frustrating to watch because it’s hard to tell what’s real or not it nevertheless proved to be a real mind-bender and accurate in its bad pronouncements of television. Though at its release it was generally panned by critics and ignored by the public, it has of late become a more reputable part of Cronenberg’s opus.

The special make-up effects were by Rick Baker, who won the first Oscar in that category for An American Werewolf in London (1981). 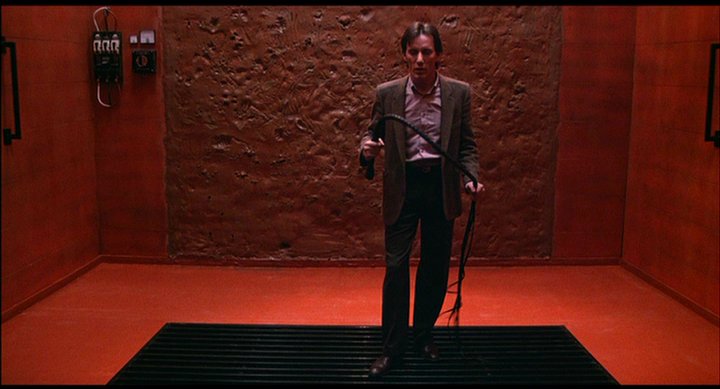