“A superficial but entertaining roller coaster ride of nonstop action.”

A superficial but entertaining roller coaster ride of nonstop action featuring clichéd characters and contrived situations, which were mainly conceived to show off the special effects. The story is so slight that there is no danger of it interfering with the action scenes. It’s a Hollywood blockbuster for those in need of escaping reality for two hours, and should prove to be enjoyable for those who are willing to go with the flow of the action and suspend their critical judgment. The reward will be a visual treat of well-executed stunts and a film that had the glossy look of a National Geographic photo shoot. Director Martin Campbell (“Goldeneye“) creates one life-and-death scene after the other. Viewers could go snowblind just watching a series of mountain catastrophes befall the adventurous climbers. The film throws out almost any possible danger there is to be found on a snow-capped mountain and the mountain climbers try to overcome these impossible obstacles. There is also, needlessly to say, a race-against-time sequence to save some climbers.

The opening eight-minute scene, derivative as it is, is brilliantly done and captures whatever underlying tension the film was to later on build up to. The Garrett family is out for a pleasure mountain climbing trip to the ochre cliffs of Monument Valley, as Peter (Chris O’Donnell) and his sister Ann (Robin Tunney) are climbing with dad Royce (Stuart Wilson) and a couple of unnamed companions. One of those companions first has his backpack fall and thereby loosens the tow rope entangling the others, trapping the family with the other two companions dangling off a peak. The companions can’t hold on and tragically fall. Royce warns that the line won’t hold all three for long and pleads that his son cut him loose to have any hope of saving his children. Ignoring Annie’s tearful protests, Peter cuts the rope and the father falls to his death.

It’s three years later and Peter is a National Geographic photographer shooting in the Himalayas. He ends up at a Pakistani military base, where they are in the middle of a war with India. Nearby is a K2 base camp, where Annie is a crew member on billionaire sportsman Elliot Vaughn’s (Bill Paxton) team that is set to climb the dangerous summit of K2–the world’s second-highest peak. The brother and sister reunite after a long absence since the tragedy. They never discussed their father’s death since the tragedy, but have gone their separate ways. Peter has abandoned mountain climbing, while Annie has become known as the fastest climber in the world and is a Sports Illustrated cover girl. She is still upset with what Peter did and could hardly face him, much less talk to him about it.

At the richly built base camp of Elliot’s expedition, the arrogant businessman has surrounded himself with the best team money can buy including the foremost climber in the world, Tom McLaren (Nicholas Lea). He is to lead Elliot to the summit of K2 in time to coincide with one of the planes flying overhead from Elliot’s new airline he is launching. The commercial motive for the climb and the callous way he will soon treat his fellow climbers makes him the film’s designated one-dimensional villain, and adds some more spice to a film that is overspiced already with clichés.

Warned by the base camp of severe weather conditions Elliot refuses the leader’s advice to turn back and manipulates the leader to go against his better judgment and continue on, where they reach the vertical limit at 26,000 feet–significant because the oxygen is very thin. When a wind storm hits Elliot, Annie and Tom end up inside a deep cavern that becomes sealed by an avalanche. The three realize that they have only 36 hours to survive.

Peter impatiently arranges for the rescue attempt by quickly assembling a diverse team of volunteers who have little chance of succeeding but sign on for the glory, or their concern for the victims, or for the money offered. The Pakistani Army helps out by supplying the six rescuers with canisters of nitroglycerin — an homage to “Wages of Fear.” The rescuers will try to blast the victims out of the cavern, but must be very careful when climbing because with just one spill of the explosive liquid there is the certainty of a tremendous explosion. There will be many tremendous explosions that rock the Himalayas and if mountains repeatedly exploding and climbers falling down mountain peaks in colorful ways is your idea of enjoyment, then this is the film for you.

The rescue crew includes one of the world’s beautiful supermodels, who in this film happens to be a medic and an expert climber, Monique (Izabella Scorupco); a Muslim practitioner, the Pakistani porter Kareem (Alexander Siddig); the comically insane Aussie brothers Cyril and Malcolm Bench (Steve Le Marquand, Ben Mendelsohn); and, the leader of the crew, a hard-assed master mountain climber who became a hermit and for the last few years stopped everything to search only for his wife who never returned from Elliot’s last tragic expedition to K2, Montgomery Wick (Scott Glenn). The craggy-faced Wick is bent on revenge against Elliot, blaming him for his tour guide wife’s death. He’s also a friend of Peter’s father and what goes for wisdom in this picture, comes from his rugged lips.

The action keeps coming, the cliché situations get resolved somehow, and even though the action sequences couldn’t possibly be real — the great photography and beautiful vistas made the locations seem out of this world. The filmmaker used the Southern Alps in New Zealand as his setting and you could have fooled me, because it sure looked like the Himalayas. It also looked like it could be a long commercial made with beautiful yuppie adventurers who are shooting an ad for Club Med or, maybe, it could be a National Geographic TV special. But as a feature film, it lacked good dialogue and credibility to be taken as anything but lightweight hokum. 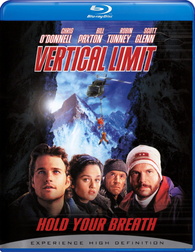 BUT I’M A CHEERLEADER