“Beautifully photographed in dazzling colors and with hypnotic chanting music, soberly tells of Tibet’s struggle to survive its forced and repressive occupation by the Chinese Reds.”

Documentarian and student of Buddhism John Bush delivers the third part of his essential viewing “Vajra Sky Over Tibet.” It’s part of the “Yatra Trilogy,” started in 2001, that follows “Dharma River” and “Prajna Earth.” The movie is a compelling filmed pilgrimage (The Sanskrit word for pilgrimage is yatra, while vajra means “thunderbolt of awakening”–the indestructible truth, the study of Vajrayana (Tantric Buddhism)) through Tibet’s distant past (from the time 1,500 years ago when the Indian Padmasambhva brought Tantric Buddhism to Tibet) and the current period under forced Chinese rule since the invasion in 1949 by Mao and complete take-over of the country in 1959 that has so far killed over a million Tibetans, caused the exile of over 150,000 (including the Dalai Lama and most of its teachers who were not killed or imprisoned) and the destruction of its religious institutions. “Vajra” was shot by a skeleton crew (posing as pilgrims) on the sly without the permission of the Chinese authorities, therefore the film does not include interviews with any Tibetans “for fear of reprisals.” What it includes is a pilgrimage to central Tibet (the second largest city of Shigatse, where the Panchen Lama resides, and Gyantse) and Lhasa (the capitol now inhabited by a population that is half Chinese) that bears witness to the cultural genocide of Tibet’s religious traditions and how the Tibetans are living under persecution without basic freedoms in their own country. It’s narrated by Bush–and the two Tibetan exiles–Tenzin L. Choegyal, a nephew of the Dalai Lama, and Dadon, a Tibetan singer, who also provides the score.

The film, beautifully photographed in dazzling colors and with hypnotic chanting music, soberly tells of Tibet’s struggle to survive its forced and repressive occupation by the Chinese Reds. It shows the people’s indomitable faith despite their religion being so compromised and their very survival being threatened. It also serves as a travelogue of Tibet’s fairy-tale architecture, magnificent temples (such as the bustling Jokhang Temple), palaces (the Potala Palace–the now over a thousand empty rooms that once served as the home of the Dalai Lama in Lhasa), monasteries (Gandan Monastery, Palkhor Chode Monastery), festivals, Thankas, large statues of the Buddha, prayer wheels, prayer flags and breathtaking landscapes.

Tibet is a vanishing civilization and this moving, heartfelt and erudite documentary serves as an important record of what still remains, as it earnestly explores some of the universal ideals of wisdom and inner peace that are part of the ancient Buddhist traditions. Some might get turned off by its not explaining some of the strange Buddhist terms used (probably assuming the viewer for such a sophisticated film already has some knowledge about the Eight Noble Truths and the spiritual path through the Buddha, Sangha (community) and Dharma (universal law)). I don’t think it’s a big deal. For those not thrown into a snit over that oversight and who use the film as a learning opportunity, there are many benefits to be derived from its accurate presentation of the religious traditions and the sharp history lesson presented that has a feeling of urgency and conviction. It seems things are only getting worse in Tibet and it is hard to tell when everything that made Tibet so unique and spiritually special might be completely destroyed by the barbaric behavior of the Chinese Reds, which makes any projections about the future uncertain and this film more valuable than most documentaries because of its vital subject matter and timing. The Panchen Lama, Tibet’s second highest lama in authority and the one responsible for choosing the next Dalai Lama, was arrested as a six-year-old in 1995 and herded away to China with his rural Western Tibet herding family, where he’s under house arrest and hasn’t been seen by the outside world since. This makes it uncertain if there will ever be another legitimate Dalai Lama; the Dalai Lama has already said if he is reincarnated it will not be in Tibet. In the meantime the atheist Chinese authorities had the audacity to choose their own six-year-old Panchen Lama, and have him under control of their leaders and are educating him without the benefit of the uncompromised teaching from the monks.

Bush shows us what remains from the glorious past, as the Chinese Reds are busy methodically forming a police state in Tibet and going about their business of eliminating organized religion. This is happening right in front of us, while most of the world slumbers. 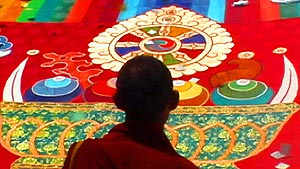