“I found this unsettling story to be gripping.”

Advertised as a disturbing true story documentary about Doug Bruce who on July 3rd, 2003, during the day, found himself on the F train heading for Coney Island and suddenly realized he couldn’t remember anything–his name, his occupation, where he lived, or his family. The film, which plays out as the real film noir Memento, is by Rupert Murray, a friend of the amnesia victim, who puts things on film that are fascinatingly scary but much too sketchy. Murray becomes witness to his friend’s efforts to try and put his life back together, and reveals the intensity the young man goes through to reinvent himself. Several newspaper stories have questioned the veracity of this documentary, but the filmmaker swears Bruce’s amnesia is real. If it’s a hoax (which it very well might be), you can count me as one of those who would nevertheless love him for it in the way Orson Welles did those fakers in “F for Fake.” The heart-breaking mystery story follows the subject 21 months after his accident and finds he still has not regained his memory. But the wealthy yuppie seems to be a much nicer person since going after art than when he was a Wall Street businessman in his former life; he has learned how to get on without his lifetime memories and seems to be a gentler person than when he was a jet-setter (as evidenced by home movies taken before the accident).

The frightened young handsome and articulate man is staring out at the seedy Coney Island section without a memory or identification, and turns himself into a police station. He’s then brought to the Coney Island Hospital ER and sent to the psychiatric ward. Luckily he’s identified two days later by reaching a random phone number in his pocket, and learns from the Long Island girl, Nadine, he dated only a few times that he’s Doug Bruce–a 35-year-old retired British-born stockbroker with a fancy Noho loft, who at 30 decided to study photography full-time. The information doesn’t jar his memory, but it takes us on a wild ride to his past and how he deals with this situation. His former girlfriend of eight years Magda returns from Poland to take care of him with TLC and is puzzled because he’s really a different person; he learns his mother died and flies to Spain to meet his well-to-do father Ivan and sister Marina for the first time since the accident, but can’t establish any warmth to them he might have had before; he then visits his hometown of London and reunites with his old mates but doesn’t recognize them and doesn’t seem to be interested in keeping up the friendship, as he is clearly the same man but no longer the same person. The filmmaker, someone Bruce knew in London 15 years ago, is one of the Brits he meets again in London; the other is the Aussie Narelle, who becomes his live-in girlfriend.

I don’t exactly know where the filmmaker is going with this sad tale, that has a happy ending–that is, if you go along with the subject being cool with not having his memory back. Whatever, I found this unsettling story to be gripping. It raises but offers no answer to the philosophical question of — Who are we? The way I look at it, even if it’s a hoax (the film could have used doctor reports on his amnesia treatment to erase some of my doubts, though I still believe it’s not a hoax), it’s still a film that caught my interest and made me think more intently of who the hell am I. 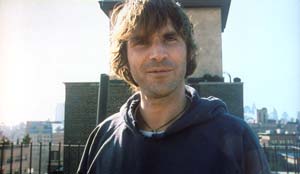 WOMAN WHO LOVES GIRAFFES, THE