“It’s a bad trip LSD-like movie you either love or hate, no in-between.”

In the film’s savage opening scene, John is beaten by army deserter Luc Devereaux (Jean-Claude Van Damme) and his other two black clad rogue Universal Soldiers (Unisols), robots created by the government but who go off the reservation, and then is forced to watch the execution of his wife and child. Nine-months later, coming out of a coma and released from the hospital, our boy, not yet realizing he’s a robot, tries getting back his memory and seeking revenge.

John is pursued by the fierce madman Unisol dubbed The Plumber (Andrei Arlovski), and has a series of violent cartoonish clashes with him in a strip club, during a bumpy ride car chase through the city streets and finally in a centerpiece swinging baseball bat fight inside a sporting goods store.

If things weren’t stupid enough, the murky plot line leads to several more gratuitously violent bloody fight scenes and a chance for John to get his hands on the evil government doctor (David Jensen) who created the genetically created soldier robots and then John takes on many other warrior robots (whose counting!) until he finally deals with his main enemies, the Unisol leader Devereaux and, his right-hand man, the raving lunatic psychopath soldier Andrew Scott (Dolph Lundgren). As if there wasn’t enough action, the confused John then returns to face the menacing Agent Gorman (Rus Blackwell) and kills him after learning he never had a family, they were only memories created in his chip to think he was a dedicated family man. 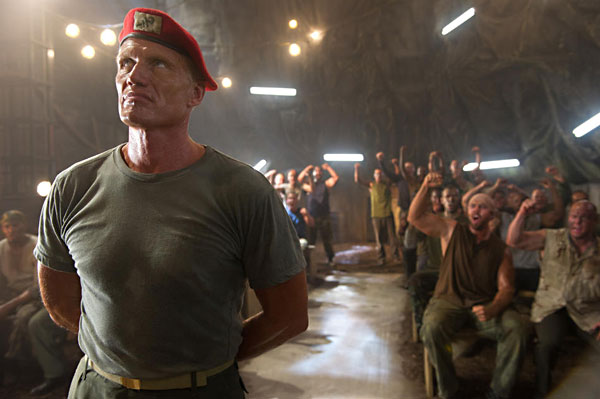