Andy Abrahams Wilson (“Casualty”) directs this well-researched investigative medical documentary over the hidden story of Lyme disease (named for the Connecticut town where the tick-borne illness was first identified), which happens to be modern time’s most controversial and fastest growing epidemic (some 200,000 each year are victims). It lets us see how each year many suffering the disease go undiagnosed or misdiagnosed, some are even told it’s “all in their head.” The Infectious Diseases Society of America, the establishment medical community, claims chronic Lyme simply doesn’t exist – blaming other ailments and, even, psychological disorders.

The doc follows the stories of patients and doctors dealing with Lyme disease and having to confront a health care system more interested in profit than in a humane way of treating the disease.

The informative film mixes interviews and archival footage, as it chronicles six chronic Lyme-disease patients and a small group of “Lyme-literate” physicians trying to deal with treatment and the system. The heartbreaking tales have the filmmaker taking a deserving activist role in siding with those calling for unconventional treatments and the long-suffering patients. It concludes on a hopeful note for chronic sufferers, as pathologist Alan MacDonald links in his lab experiments the Lyme infection to microbial biofilms.

Under Our Skin succeeds as a public information movie that is informative and passionate about its advocacy, and makes a convincing case for the existence of chronic Lyme and how patients are being abused by the medical and insurance establishments. 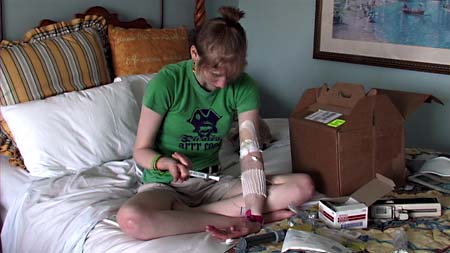