“Stylish, arty and quite enjoyable.”

Reviewed by Dennis SchwartzA remake of the superior 1949 film noir “Criss Cross” starring Burt Lancaster, that is nevertheless quite engrossing on its own terms. It’s based on the novel “Criss Cross” by Don Tracy and is written by Sam Lowry and Daniel Fuchs. The updated version by Steven Soderbergh (“Traffic”/”King of the Hill“/“Sex, Lies, and Videotape“)is stylish, arty and quite enjoyable, even though not as suspenseful as the original. It plays out as more or less a character study on irresponsible individuals rather than the original’s more cynical obsessive melodrama of love and betrayal.

Reformed twentysomething gambler Michael Chambers (Peter Gallagher) takes the bus back to his hometown of Austin, Texas, for his widowed fiftysomething mother’s (Anjanette Comer) upcoming marriage to older armored security guard Ed Dutton (Paul Dooley). The obsessive gambler, Michael, left his pretty wife Rachel (Alison Elliott) when overwhelmed with gambling debts and also split from his family. His resentful police officer brother David (Adam Trese) dislikes him because he always had a crush on Rachel, considers his brother a low-life and holds it against Michael that he never showed for their father’s funeral or helped mom when she needed support; while mom holds no grudge and welcomes Michael back home with open arms.

Michael is hired by Ed’s boss, Hinkle (Joe Don Baker), and rides as a security guard with his nice guy step-father in an armored car delivering money to banks. Still in love with the materialistic minded Rachel, he’s displeased that she married the local psychopathic thug and nightclub owner Tommy Dundee (William Fichtner). The jealous hubby has violent temper tantrums over Michael’s return, and when he catches Michael and Rachel together he threatens physical harm. Thinking fast on his feet to get out of this jam, Michael gets into a bigger jam by setting himself up to be the inside man on a heist of his armored car. His plan is to somehow double-cross Tommy and get him out of the way, but the botched robbery has tragic consequences for all.

Using multiple flashbacks to piece the back story together from the past to the present, is seamlessly done. Soderbergh also cleverly reworks the original ending with a twist that’s disturbing. It’s a well-constructed and coldly-calculated creepy pic, that has a gnawing way of getting underneath your skin. 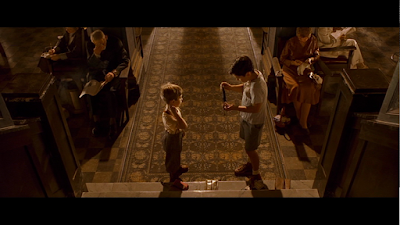 AVA: A TWIST IN THE ROAD