“Effective in showing how evil was slavery, but still has a faulty paternalistic attitude to its subjects.”

A version that takes some liberties with abolitionist’s Harriet Beecher Stowe’s 1852 anti-slave novel Uncle Tom’s Cabin (the escape scene over the ice wasn’t in the book, but comes from its stage versions), but still impresses with its sympathetic portrayal of the blacks being oppressed by slavery. It’s directed by studio veteran Harry Pollard after it was turned down by D. W. Griffith. The director’s white wife Margarita Fischer plays the starring role as the mulatto slave Eliza. The role of Uncle Tom, who has come to be thought of in a derogatory way as a stereotyped good Negro, one who is submissive and a defender of the white man’s system, is played by the Negro James B. Lowe in a role traditionally played by a white man in blackface. Tom’s character is given some depth in the film, and the negativity attributed to his character is really taken from how he was portrayed in the theater. The big-budget film (an astounding $2 million for that time frame) only did fair at the box office at home, but did much better in England.

The story starts off in 1856 on the idyllic Kentucky plantation of the Shelbys (Jack Mower & Vivian Oakland), depicted as the kindly slave owners of their beloved Tom and Eliza–trusted and treated with privilege. The pic tells us this is the rule not the exception, though there are a few mean-spirited masters. When two mulatto slaves, Eliza and George Harris (Arthur Edmund Carewe), owned by mean-spirited neighboring slave owner Edward Harris (Skipper Zeliff), get married formally as arranged by the Shelbys without Edward’s consent the overseer takes George back by force. George on a snowy winter night a few years later tells Eliza that he’s escaping to Canada and will try to raise money to buy her and their son Harry’s freedom. Later that same evening it’s learned that Shelby is in debt to money lender Haley (Adolph Milar), who agrees to stop foreclosure if he sells him Tom and Harry. Overhearing that, Eliza flees with her son from pursuing bloodhounds across a half frozen river by stepping over a number of ice floes and avoiding a dangerous waterfalls to arrive at the free state of Ohio (originally filmed on the Saranac River near Plattsburg, New York, but when they didn’t get enough footage the studio heads refused to return there and instead filmed it from scratch in the back lot with artificial snow). Aided by Quaker Phineas Fletcher in a daring rescue from a tree limb, Eliza and son are taken into his loving home. But the next day she’s taken by the authorities and returned to slimy lawyer Marks (Lucien Littlefield) and his bully companion Loker (J. Gordon Russell), hired by the slave owner to retrieve the runaways, as the Dred Scott decision states that runaway slaves can be returned even from free states. Eliza, Harry and Tom are on the same riverboat heading down river; also aboard as a stoker is George, who doesn’t know the others are there. Haley spots George and this forces him to jump ship near port in Louisville rather be returned by Haley. Meanwhile the crooked Marks sells Harry to another overseer, and Eliza is torn to near self-destruction that she’ll never see her child again. In New Orleans, she’s sold at a slave auction. Augustus St. Claire (John Roche), a kindly plantation owner in New Orleans, buys Tom when his cute little daughter Eva (Virginia Grey) is befriended by the kindly older slave aboard the riverboat. In New Orleans, Tom and Eva form a happy relationship with Tom being protective of the sickly child. Eva also forms a lasting friendship with a naughty black girl named Topsy (Mona Ray), who becomes her servant. Eva dies and soon after her father dies, as Tom is then sold to the ruthless northerner Simon Legree. He also buys Eliza. It’s soon learned that Cassie (Eulalie Jensen), an older mulatto slave, is Eliza’s mom. Telling of her abuses under Legree, mother and daughter plan to escape and end up hiding in the attic. Tom is beaten to death by Legree rather than reveal their hiding place. Eventually a drunk and belligerent Legree finds them but is rocked by guilt over the murder of the gentle Tom and fear of the oncoming soldiers, and the tyrant thereby falls to his death from the attic. It concludes in an overwrought manner as George emerges from a passing band of ragtag travelers with a rescued Harry by his side, and the loving couple reunite as a family.

There were at least ten versions of Uncle Tom’s Cabin during the silent era. It was also done often on the stage. It’s a story that obviously has captured the American imagination and needs retelling; it’s one of the more well-known classic stories. The film version was effective in showing how evil was slavery, but still has a faulty paternalistic attitude to its subjects. 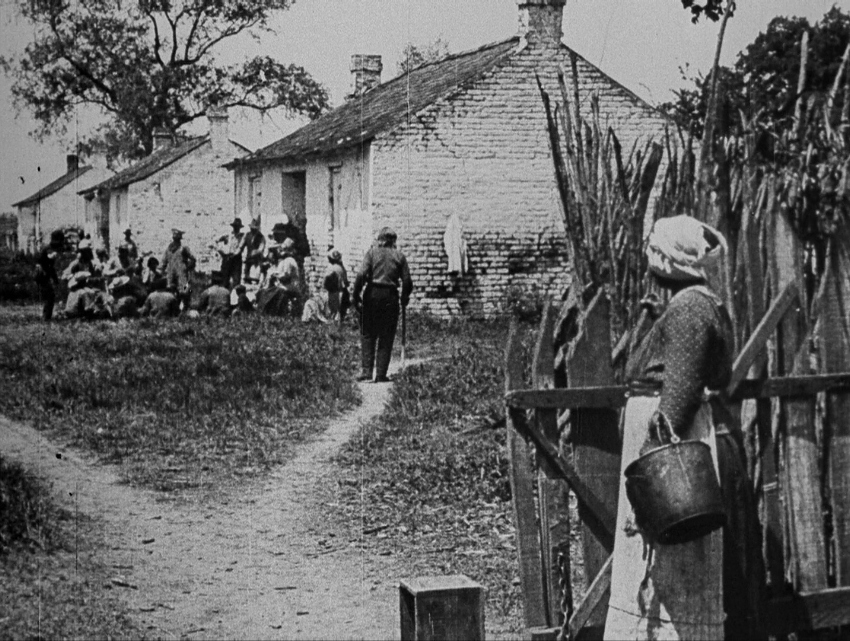