“A bleak but powerful anti-war drama.”

A bleak but powerful anti-war drama that is written and directed by Vittorio De Sica (“The Bicycle Thief”), one of his best films, and coscripted by the director and his longtime collaborator Cesare Zavattini from a novel by Alberto Moravia; it won for Sophia Loren a much deserved Best Actress Oscar, the first time a foreign language film brought that honor to an actress. Loren and De Sica both hail from Naples, and have been in nine films together as fellow actors and eight where De Sica was director.

The story takes place in Italy during last phases of WW II. Fed up with the daily bombings by the Allies in Rome, the thirtysomething widow Cesira (Sophia Loren, then 26) leaves her grocery story in the hands of local coal delivery man Giovanni (Raf Vallone) and takes her angelic 13-year-old daughter Rosetta (Eleonora Brown) back by train to her birthplace in the rural village of Sant Eufemia in the south thinking they’ll be safer there. Before leaving Cesira lets the aggressive Giovanni, a married man with two kids, make love to her.

In her village Cesira finds she can’t escape the war, that the Allies are still bombing the villages, food is scarce and the German soldiers stationed there behave like monsters with the impoverished locals. She meets one sensitive and intelligent man, Michele (Jean-Paul Belmondo), she likes but thinks he’s too young for her, a 25-year-old student who is anti-fascist and has a crush on her but is too timid and proper to act upon it. The villagers are mostly heartened by the news that Il Duce has been jailed and the Germans are retreating, but before the Germans leave they take Michele by force to be their guide out of the mountain area. Cesira makes an unwise decision to return to Rome with Rosetta before the expected arrival of the Americans to clear the roads and pays a severe price for that bad decision, as the two women are nabbed on the way by a retreating platoon of Moroccan troops and both women are brutally raped on the grounds of a bombed-out church. The experience leaves both women shaken, but Rosetta remains in a state of shock and resorts to prostituting herself for a pair of silk stockings to a friendly truck driver (Renato Salvatori) driving them back to Rome. When the two women learn that the Germans killed Michele, they come together again in a loving embrace and try to gather enough strength to survive these last days of war and regain their humanity. 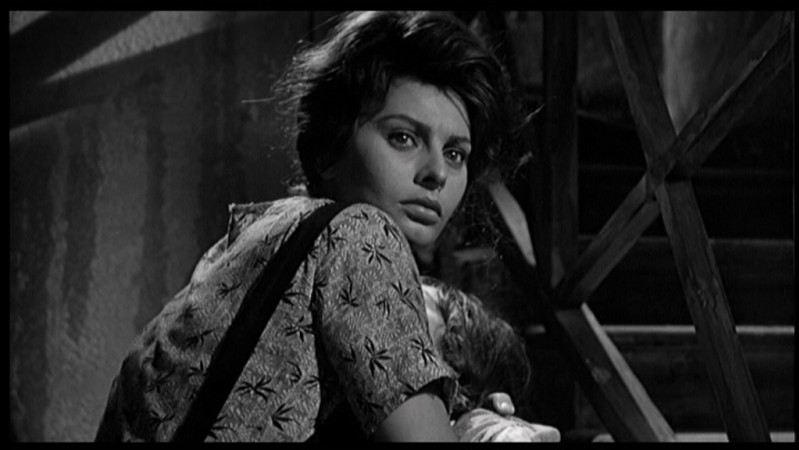