THE TWO FACES OF JANUARY

“The sleek old-fashioned suspense story kept my interest throughout.”

Iranian-born filmmaker Hossein Amini, the screenwriter of “Drive” and “The Wings of the Dove”, in his directing debut, films an absorbing, stylish and complex thriller. Amini bases the thriller on the 1964 novel by Patricia Highsmith, Hitchcock’s favorite author. The thriller succeeds as a Hitchcock-like work.

In Athens, in 1962, the Greek-speaking American twentysomething Yale grad, Rydal (Oscar Isaac), is working as a tour guide. He has run away from his father, a prominent archeology professor at Harvard, who is despised by him because he failed to give him the love he desired. When his dad recently died, Rydal did not go home for his funeral. Bothered by that bad relationship, Rydal ponders its ill-effects and writes about it in his diary.

Also in Athens, staying at the city’s most exclusive hotel and sightseeing at the Acropolis, is the charismatic American couple, the arrogant middle-aged financial swindler Chester MacFarland (Viggo Mortensen) and his much younger vulnerable and attractive wife Colette (Kirsten Dunst). Rydal is drawn to Chester because of his wealth and that he somehow reminds him of his father. Rydal is also attracted to Colette because of her beauty, and manages to get hired as their tour guide for a day thanks to Colette. At night Rydal accepts an invitation to dine with the couple, and takes along as a date one of the innocent girls from his tour, Lauren (Daisy Bevan), whom he cheats by skimming money off her drachma exchanges. In a cab, Colette loses the bracelet present her hubby impulsively just bought for her. Thereby Rydal leaves his date and returns to MacFarland’s hotel with it, where he encounters in the hallway Chester dragging an unconscious man and placing him in a room. Chester replies that the man attacked him, so he had to knock him out to protect himself. The next day in the newspapers it’s learned that the man is a New York private detective (David Warshofsky), pursuing Chester in Europe, trying to get back the money Chester fleeced from his clients.

Even though knowing this, Rydal helps the criminal couple flee Greece on a phony passport he arranges with a wary Greek forger (Omiros Poulakis). The on-the-run desperate couple await for their false passports in Crete. Meanwhile things turn sinister on Rydal’s travels with the couple, as a love triangle develops and Chester becomes crazed with jealousy. Dark secrets emerge from the dangerous Chester’s past, showing he’s not exactly the sophisticated charmer he appears to be. When Chester senses the kid wants his money and probably his wife, things take a nasty turn. After a bumpy and murderous journey, things eventually get resolved in Istanbul between the psychologically needy male leads.

Tension simmers throughout the film, as the three main characters hide their lies and secrets behind their phony affable poses.

The psychologically screwed up Rydal, a man with serious character defects, recognizes that all is not as it seems with the MacFarlands, nevertheless he clings to them despite all the signs warning him to keep away–intuitively knowing that they are not good for each other.

The top-notch psychological thriller runs by us the Janus myth of duality, of having an inner face and an outer face, to explain its maddening tale of lust and greed as what propels the two male protagonists to do the wrong thing despite pretending they are doing the right thing.

Because the acting and storytelling are superb and the stunningly beautiful location shots of Athens, Crete and Istanbul are a sight to behold, the sleek old-fashioned suspense story kept my interest throughout. 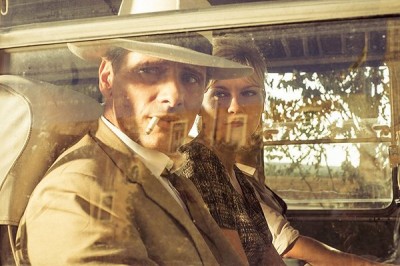