“I immensely enjoyed it as a psychologically pulsating underrated film noir.”

A slice of life thriller whodunit skillfully directed by Philip Kaufman  (“Quills”/”The Right Stuff”), who resides in San Francisco and knows his way around his hometown. The city is beautifully captured by cinematographer Peter Deming, while its controversial story is adeptly written by Sarah Thorp.

Jessica Shepard (Ashley Judd) is an unmarried thirtyish psychologically wounded female macho cop in San Francisco who was just promoted to homicide detective after nabbing a psycho rapist (Leland Orser) who attacked her, whose father is the wealthy head of a Big Pharma company. She then partners with homicide detective Mike Delmarco (Al Pacino), and also tells her pesty ex boyfriend cop Jimmy (Mark Pellegrino) to buzz off it’s over.

She has blackouts after frequent alcoholic drinking binges (drinking Sangria at home before retiring for the night). Celebrating her promotion with friends at the famous North Beach restaurant Toscas, she then goes by herself, dressed in a black leather jacket, to a waterfront dive to pick up a sleazy guy for some rough sex. When she goes home, she blacks out.

The promotion calls for mandatory meetings with the precinct shrink (David Strathairn) for psychological evaluations (an obligation every cop must go through who has something traumatic in their past), The shrink delves into 25 years ago when her cop father went on a killing spree, and shot her mother and then himself.

Her first murder case comes on her first day on the job, as Mike receives a call from the harbor police about a floater in the bay that she recalls from one of her one-night stands a month ago. His body is found with cigarette burns on his hands. What follows are two more bodies soon found with the same kind of burns on their hands as the others. Jessica also recalls a quickie with another and an affair with the other.

These discoveries deeply bother her, as she wonders if she’s the serial killer. We also learn her legal guardian is the police commissioner (Samuel L. Jackson), who was her father’s partner on the force and raised her. He’s now concerned about her mental state when he finds out from her about the bodies discovered and that she had sex with the vics. She also tells her partner this, who tells her she should drink less (which, if nothing else, was funny).

The film has great locale shots of S.F. that include the infamous Pier 39 sea lions and a foggy Golden Bridge.

Things get more intense when the third vic, a snooty lawyer (D. W. Moffett), defending the psycho who attacked, she once had an affair with and now can’t stand, turns up slain in his hot tub.

Camryn Manheim is terrific as the cock-sure lab technician Lisa who says “Everyone leaves something behind.”

Though it falls into the Hollywood formula category for thrillers, and Jackson and Garcia are good but do not have juicy parts where they can show off their acting chops as much as Judd can, nevertheless I immensely enjoyed it as a psychologically pulsating underrated film noir–a film I believe most critics badly missed on how damn good it was. 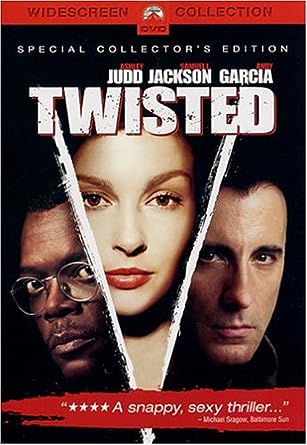 NIGHT HAS A THOUSAND EYES