“Smoothly blends together a lighthearted comedy and a darker edged mystery story, and excels in escapist entertainment.”

A literary spoof of Victorian England that smoothly blends together a lighthearted comedy and a darker edged mystery story, and excels in escapist entertainment. J. Walter Ruben (“Ace of Aces”/”The Bad Man of Brimstone”/”The Great Jasper”) directs with apt flourish. It’s based on three short stories by Robert Louis Stevenson called “The Suicide Club,” that were in his book entitled the “New Arabian Nights”;” it’s written with appropriate craftsmanship by Manuel Seff and Edward E. Paramore Jr..

It was first filmed in 1909 by director D.W. Griffith. A British version was released in 1914. This 1936 American Montgomery-Russell version was the first talkie feature length.

It’s set in the 19th century. Most of the action takes place in London. Prince Florizel of Carovia (Robert Montgomery) and Princess Brenda of Irania (Rosalind Russell), each an heir to the throne of a fictitious European country, are scheduled to wed in an arranged marriage that neither is happy about. The marriage has been arranged by their royal fathers and they have not seen each other in fifteen years. To celebrate the upcoming marriage, Florizel’s father, the King (E. E. Clive), gives him a holiday in London.

On the boat to London, Florizel takes the name Mr. Theopholus Godall and is asked by the mysterious Miss Vandeleur to guard some papers for her. She’s really Princess Brenda, and the two don’t recognize each other after not seeing each other for so many years.

In London, Florizel is watched over by his father’s loyal subject, Colonel Geraldine (Frank Morgan). Florizel meets in a restaurant, “The Man with the Cream Tarts,” Cecil Barnley (Louis Hayward), who asks Florizel to share some tarts and then tells him he’s a member of the Suicide Club, an organization of men and women of wealth who have tired of life and don’t have the nerve to end it themselves. Florizel seeking adventure and thinking the club is a lark, persuades Cecil to hook him up with the Suicide Club. Miss Vandeleur, also at the restaurant, overhears their conversation and follows them to the club. Dr Franz Noel (Reginald Owen) is its ghoulish president; the club meets nightly over the gaming table, and whoever draws the ace of spades will be the lucky one to have their suicidal desire acted upon and whoever draws the ace of clubs will be the executioner. The death always is made to appear accidental, therefore leaving the club member no shame with their family members. Cecil draws the death card and Miss Vandeleur the executioner’s card; the next morning Cecil’s death is reported in the newspapers as an accident.

When a now concerned Florizel attempts to further investigate he is startled to learn the real identity of Miss Vandeleur and that she’s not a killer, and that the Suicide Club is being used as a subterfuge by a gang of international terrorists that are led by the club’s president who was exiled from Carovia and wants revenge on Florizel by toppling him from his throne. Florizel defeats Noel in a duel; back in Carovia he happily goes through with the marriage to Princess Brenda, as both parties don’t tell their families they met in such unusual circumstances.

It starts out lively as a comedy but when the farfetched mystery story kicks in it disintegrates into a fine mess, as the film’s only saved by the likability of the stars. 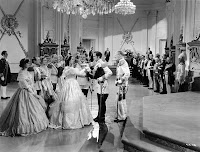 ROADS TO THE SOUTH

IF IT’S TUESDAY, THIS MUST BE BELGIUM