Steve Buscemi writes, directs and stars in a comedy drama that makes use of his hangdog look and attitude that life is a very trying experience in which he is not winning, thereby showing him mentally and physically to be a loser. This is the character actor’s debut as a writer and director, and it’s a good beginning as Buscemi is able to flesh out real people in an engaging character study, of characters who are not the inventions of Hollywood. There is a visceral enjoyment derived in seeing what makes them carry on the way they do.

Things could hardly be worse for the 31-year-old Long Island suburbanite Tommy Basilio (Buscemi), an auto mechanic who just got canned after “borrowing” $1500 from the cash register and, to the bargain, has lost the whole bundle at an Atlantic City casino. The garage is owned by his buddy Rob (LaPaglia), with whom his girlfriend Theresa (Bracco) is having an affair and has become pregnant, as he questions if the baby is his. A groveling Tommy wants her back, but she is set to marry Rob and spurns him.

The depressed but spirited Tommy, who can’t get another mechanic’s job as any prospective employer wonders why he can’t even fix his own car. So he now haplessly spends all his time as a barfly at the Trees Lounge idly talking with the colorful customers, getting involved with their scenes, and trying to pick up chicks. He resides in a small apartment that is upstairs from the bar.

Tommy eventually gets a job driving an ice cream truck and ends up getting involved in a half-hearted relationship with the seventeen year old niece of his ex-girlfriend, Debbie (Sevigny). This gets the ire of her volatile father Jerry (Danny Baldwin), Theresa’s brother.

The film, which might be semi-autobiographical and certainly influenced by Cassavetes’ style, consists of a number of sketches painting a picture of the working class characters and their limited ambitions, and their resignation that their station in life is fixed by destiny. The overall effect is to see how these regular joes make do with their lives and take all their disappointments in check as they balance humor with pathos. It’s a surprisingly effective psychological look at these characters that is both humorous and sad, but never betrays them with falseness. A small story told with wit and a tuned in ear for the loneliness the downtrodden feel in their daily lives. Though the film takes no risks, the naturalistic acting by the ensemble cast leaves a strong impression that the trivialities uncovered would also be uncovered in many other bar scenes across the country. 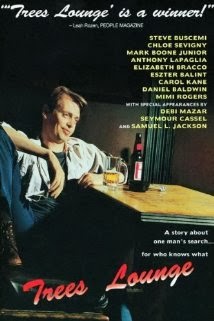 LIMITS OF CONTROL, THE