It’s an intense romantic drama set in New York, that’s written, directed, edited, and scored by bipolar filmmaker Paul Dalio. The probing film is inspired by the visions in Van Gogh’s “Starry Night.” It lets us know that living with a bipolar disorder doesn’t mean one can’t function in society–in fact, Dalio considers it a gift because it increases creativity if not repressed.

Dalio proves to know what he is telling us about the illness and is able to blend together an engaging love story by providing a true look at the disease as it manifests. He connects the disease symptoms with a long list of artists (from Lord Byron to Hemingway) who were also “touched with fire” and had a tough time fitting into a so-called normal society. We see that the illness makes one feel everything in greater degrees, and are also warned that the safest way of dealing with it is to take the prescribed meds. Carla Lucia (Katie Holmes) and Marco (Luke Kirby) are two young adult bipolar patients in a mental hospital, who share a common interest in poetry. They meet in a group therapy session and fall madly in love. When their relationship becomes too manic their treating shrink, Dr. Strinsky (Maryann Urbano), recommends they be kept apart. When they rebel and try to see each other for all night sleepless sessions, they are both discharged from the hospital to the care of their concerned parents. Months later they connect again and move in together. Their romance troubles both their bewildered parents. His father (Griffin Dunne) is verbally abused by his son for not preventing his bipolar mom from leaving, while her parents (Christine Lahti & Bruce Altman) are worried if she can survive such a manic relationship without taking her meds. Incidents include Marco being forced into a holding cell by hospital attendants after a violent fit, both despondent main characters attempting suicide, Marco smoking weed and Carla drinking too much wine and whiskey, intense battles to convince the patients to stay on their meds, and the patients saying they are aliens rather than humans.

Though it honestly tries to open a discussion about love, art and the effects of the disease, the message is murky and the discussion never gets off the ground. It argues with itself over the virtues of madness, claiming the ability to love (or create great art) is a silver lining of the illness. While probing for the fine line between genius and madness, the well-intentioned Dalio spills his guts out by delivering valued insights into the illness through his alter ego protagonists. But in the end every argument over genius, love or madness turns up vague and superficial. Marco when not sulking, obsesses over the real titular 1993 book by Kay Redfield Jamison, “Touched With Fire: Manic-Depressive Illness and the Artistic Temperament,” who makes a curious but disappointing appearance in the film that clears up little.

Considering the limits of the script, both main characters do a credible job, in a film I admired but was not crazy about. 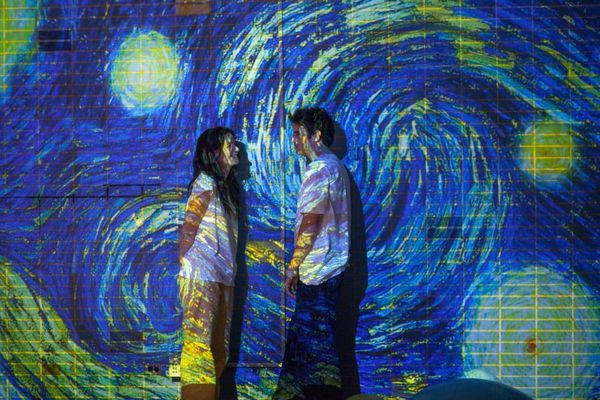