THEY MADE ME A FUGITIVE (I BECAME A CRIMINAL)

A postwar British noir film; revenge being the theme. Clem Morgan (Trevor Howard) was an RAF pilot during the war, but is now disenchanted. He drunkenly chooses to join a criminal gang of black marketeers; he is encouraged to do so by his girlfriend Ellen (Ashley).

When he discovers his boss, Narcy (Griffith Jones), is dealing in drugs, he tells him he wants out. The vicious gang leader, hating the amateur crook and pining for his woman, decides to frame Clem for murder. He has gang member Soapy (McNaughton) run over a cop during one of their escapades, and they crash the car into a lamppost while knocking out Clem. They escape into a waiting car while leaving Clem there to take the rap. He is convicted of manslaughter, and will serve a 15-year sentence in Dartmoor prison.

Clem receives a prison visit from Sally (Sally Gray), a chorus girl and the former girlfriend of Narcy. The jealous woman tells Clem that Narcy dumped her for his girlfriend Ellen. She also says that she knows he could get Soapy to corroborate his innocence. Soon, Clem escapes. While on the run, he enters a household and the housewife gives him clothes and food and a gun. She says the gun is for him to kill her drunken husband — thinking one more murder wouldn’t make a difference to him. He refuses, but when he leaves the gun behind she has his fingerprints on the gun and kills her husband. The newspaper headlines proclaim that the escaped convict has killed another and they increase their manhunt.

Clem hitches a ride from a lorry and jumps the driver, thereby driving the lorry through the roadblock and into London. Inspector Rockliffe (Ballard Berkeley) suspects that Sally is in danger from Narcy for squealing to Clem, and tries to take her down to the station for her own protection. But when he leaves her with a cop, Narcy’s gang overtakes the cop and they take her back to their hideout.

Soapy and his girlfriend Cora (Ray) go into hiding, fearing Narcy will kill Soapy since he is a witness to the frame-up. Narcy sends the knife-wielding Jim (Brennan) after him. Meanwhile, Clem is determined to get revenge and tracks Narcy to the gang’s hideout. He has a fight with Narcy on the roof amid the gigantic letters R.I.P., which are brightly reflecting from the moon’s beams bouncing onto the roof as the two have a life and death struggle. There will be no happy Hollywood-type of ending here.

The film was mildly diverting, suffering from a weak story line and from having Trevor Howard as the lead actor. He is too regal an actor to play a credible noir protagonist. Cavalcanti directed in a gritty manner; he wisely used quick-cut editing, black-and-white photography, and kept the pace moving in a satisfying way. 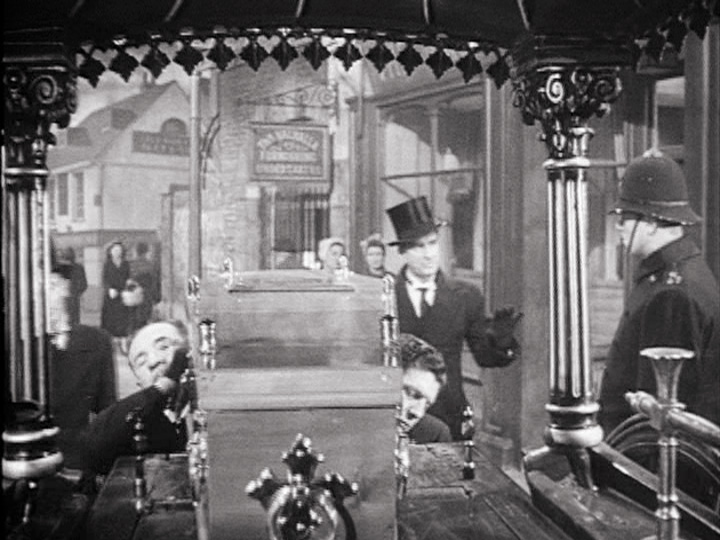