“Never pulls you into its weird story.”

An over-the-top fantasy adventure thriller haplessly directed with misinformation by James McTeigue (“V for Vendetta”/”Ninja Assassin”). The ‘wannabe’ Sherlock film never pulls you into its weird story, though it puts all its energy in the effort of making the great writer Poe into being a crazed alcoholic–so much for its mix of fact and fiction being digestible.

The atmospheric period film, set in a foggy Baltimore during the 19th century, has the horror writer Edgar Allan Poe (John Cusack), returning to his native Baltimore and running around the cobblestone streets in a cloak, helping the local police track down a maniac serial killer inspired by his writings after he’s cleared of the brutal murder of a critic (John Warnaby) he was feuding with. The writers Ben Livingston and Hannah Shakespeare cleverly have each cinema murder be similar to one in Poe’s fiction stories, but their writing is so strained that the film might only be able to pass muster as a bad joke gone public. It begins as a police procedural tale and runs out of gas as it retreats in the end to predictable plot twists to spice up its far-fetched story.

The miscast Cusack’s melancholy portrayal of the goatee-sporting impoverished boozer Poe fails to bring suspense to a loopy story that depended on suspense. We are led to believe that in October 1849 Poe spent the last five days of his life helping the Baltimore police get a serial killer and in the process mysteriously gave his life so the killer’s latest vic could live.

After four grisly murders, Poe’s fiancée Emily (Alice Eve) is kidnapped at a society masked ball and buried alive in a coffin under the floorboard of an unrevealed place — a story taken from his “The Tell-Tale Heart.” Thereby her snob wealthy father Charles Hamilton (Brendan Gleeson), the intrepid Baltimore police Inspector Fields (Luke Evans) and the anguished writer, race around town following clues the madman leaves to try and save her life.

It ends on an implausible note, as Poe is found dying, on a park bench, on the last day of his life, and raving incoherently to a stranger about someone named Reynolds that Fields should be told about.

One might be turned off by how dreary, foolishly campy, unintentionally funny and bloody ridiculous it is. At least I was. 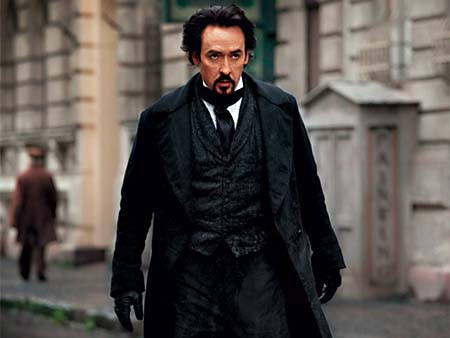