TALK TO HER (Hable con ella)

Pedro Almodóvar’s (“Tie Me Up! Tie Me Down!“/”All About My Mother“) Talk to Her won the Golden Globe for Best Foreign Film and very well might be his richest work to date (at least, I think it is). Spain, over a rhubarb regarding the director’s outspoken political beliefs, failed to nominate the film as its official entry for the Oscar as Best Foreign Film (each country is allowed only one entry). But the Academy nominated Almodóvar for Best Director, which should give the humble director at least some sense of joy. It’s a stunning masterpiece, a complex and beautiful film…one that is hard to get out of one’s mind as it slowly penetrates one’s inner workings and the many tricky issues it brings to the surface should linger with the viewer for a long time. One theme of this unsettling film centers around the lack of communication between couples even when they have no barriers between them and also their compulsion to find ways of communicating when there are barriers. But this theme gives way to a deeper religious one (without the need for a church or its dogma, just a Christlike figure willing to sacrifice himself or herself for the love of someone else), as it’s shown that love itself can cause miracles and reawaken the dead. That’s what I think the playful but sly Almodóvar is ultimately after in this pic, as it slides from a comedy romance to a more serious film involving multiple tragedies.

For starters, it’s a quirky romance story about two lonely men who become platonic friends while they are caring for the comatose women they love, as Almodóvar reverses gender roles for the caretakers. The role of caretaker is usually a female one. “Talk To Her” is also about the problems affecting those close to the coma victim and the prospects of dealing with a long convalescence. It’s also about the difficulties of communication among couples and how monologues before a mute person can become an effective way of communicating. If those offbeat themes weren’t enough of a challenge for any one pic, Almodóvar unloads a highly comical scene in the unique way he has become renown for. In this case, it’s a silent-film parody in which a man (Fele Martínez) shrinks to a height of three inches and enters into a woman’s vagina (Paz Vega). The joke is that he can now live safely there forever. You shouldn’t see an Almodóvar film if you can’t put up with his weird sense of humor, something I find refreshingly funny and could care less if some may view such antics as self-indulgent excesses.

Almodóvar’s films are an extension of the themes Douglas Sirk and Rainer Werner Fassbinder laid the groundwork for, effectively mixing soap opera with high drama, but with a side to him that can laugh easily at himself and at the foibles of those characters society rejects as misfits. Almodóvar is the kind of humanitarian filmmaker who can love such rejects for what they are without wanting to change them and can accept them into his heart because they are so real and so much in need of love, and because they are true to themselves and do not pretend to be what others want them to be they are therefore able to love freely and heal others in ways that are inexplicable.

The story takes its sweet time setting up the characters so that they are thoroughly fleshed out and the odd scenario presented makes a lot of sense once you know who you’re dealing with. It’s such a kinky plot that only a great director at the top of his game could pull it off so seamlessly and, make no mistake, Almodóvar is a great director. There’s always something happening in his scenes even when there seems to be nothing happening, as the busy camerawork keeps you occupied with the smashing colors of his sets and costumes and the gorgeous shots of an immaculate Madrid or the sterile prison in Segovia or of a lady bullfighter squeezing into her tight uniform or of the close-ups of the imperfect characters, as the viewer is left wondering what’s next in this unpredictable tale. There’s even room for the great Brazilean singer Caetano Veloso to croon in its entirety a tender, goose bump causing song of love in a café lullaby style. He’s there only because Almodóvar is a great admirer of his, but somehow he also fits into the story.

It’s a film that’s meant to be discomforting (rape serves as a way of bringing one back to life) and comforting (you can talk to the almost dead because they can possibly hear you), and of turning things in a relationship upside down (in homophobic America such a platonic relationship between men hugging each other and crying would most likely be viewed with suspicion). At the same time, it challenges one’s idea of humanity and love with its wide range of human emotions and passions. It’s a most soulful and penetrating look by the 51-year-old filmmaker into the mysteries of relationships no matter the sexual orientation. For Almodóvar is concerned about one’s humanity and his love is not limited by those old biblical boundaries laid out by the preachers of hate for their brain-dead followers. Love is free and there for the taking, that is if you are open-minded.

“Talk to Her” begins and ends with a pair of startling contemporary dance performances featuring Germany’s Pina Bausch Tanztheater. The opening dance number entitled “Café Müller” is witnessed by two men, strangers, who are seated next to each other in the theater and will later meet again to connect under odd circumstances. One of them, a male nurse, Benigno (Javier Cámara), is noticeably touched that the man seated next to him, a middle-aged travel-guide journalist from Argentina, Marco (Dario Grandinetti), is moved to tears by the performance.

Benigno is seen the next day attending to a beautiful young woman in a coma named Alicia (Leonor Watling) as if she was a goddess, and while washing her hair, clipping her nails, giving her a sponge bath and patting her down with more than motherly affection he’s talking to her about last night’s theater performance as if she can understand him. We soon learn that she’s a sweet young ballet dancer who’s been in a comatose state for the last four years, under his care, after a car accident on a rainy day, and her condition is something the hospital calls a persistent vegetative state. Benigno, who has the same pudgy appearance as the director, is genuinely concerned about his patient and is such a devoted nurse that he’s willing to also take the shift of Matilde (Dueñas). Both dedicated nurses were recommended by the hospital and hired by her father (Pedregal) to share the time caring for his daughter around the clock.

Through a flashback we learn that he lives across the street from the studio where Alicia studies ballet under her caring, motherlike teacher (perhaps even a Virgin Mary figure), Katerina (Geraldine Chaplin), and when she loses her wallet one day in the street the virgin Benigno, who is taken by many at the hospital for being gay, returns it to her and walks her home. When he discovers she lives with her wealthy psychiatrist father he goes there for treatment even though he doesn’t believe there’s anything wrong with him, but in the hopes of getting closer to her. When leaving his appointment, he sneaks into Alicia’s room and steals her hairpin as a keepsake of her. She discovers him there, but he leaves telling her not to worry–he’s harmless.

Meanwhile Marco catches a TV interview with a courageous lady bullfighter (again, another example of role reversal), Lydia (Rosario Flores), and gets permission from his editor to interview her for the Sunday newspaper. He later meets her at a bar and asks if he can do the interview, but she turns him down because he knows nothing about bullfighting and she doesn’t want to talk about her recent split-up and steamy love affair with fellow bullfighter Niño de Valencia (Adolfo Fernández). When she goes into a tantrum over seeing Niño in the bar, she asks the writer to drive her home. When he leaves, she frighteningly calls him back to kill a snake in her kitchen as she has a phobia over snakes and refuses to ever set foot in that apartment again. The contrast of her bravery in the bullring and her squeamish fear over a snake has biblical implications in that her feminine instincts are still alive despite her occupation in a mostly male sport. Soon a romantic relationship develops between them, as she can’t stand being alone and he’s been alone for too many years after his girlfriend was placed under the care of her parents and now hungers for love.

The day Marco sees her crying she’s about to tell him something important, but puts it off for later. Unfortunately, she never talks to him again as she gets gored by a bull in the ring and goes into a deep coma. As a coincidence, and what would an Almodóvar film be without such coincidences, she’s placed in the hospital room near Alicia’s. When Marco visits and stays all night, Benigno recognizes him from the theater and the two desperate and lonely men, who are vastly different, find in their common cause a reason to talk to each other while on their vigil and soon become tight friends.

The plot thickens from here on, as slowly the unnerving prior stories of both their relationships are revealed, and a surprising twist occurs that makes everything seem different than first thought. It’s truly an amazingly complex story with a richly woven blend of characters and a compassionate rendering for all of them and their search for life. Almodóvar’s sensitivity to their plight is what impressed me most, followed by the superb performances uniformly given by everyone in this stellar cast (everyone was so perfectly cast).

As for Almodóvar and his great concern for people, some of that compassion must be attributed to his spending his formative years as a persecuted gay man in Franco’s Spain. From that experience, he surely knows what it’s like to be an outsider and an underdog figure and has never forgotten those years. He’s one director who knows how to take the outcasts under his wings and reach out to them in the most human way possible. He has directed a delightful and moving film, one that touched my heart and made me so happy that such a good person and capable director is at last getting his just praises from a wide audience and not just from his limited cult following. To his credit, he did it on his own terms without giving up his principles and sinking down to Hollywood’s low level by selling out, and that’s all the more reason to embrace him and this wonderful film. 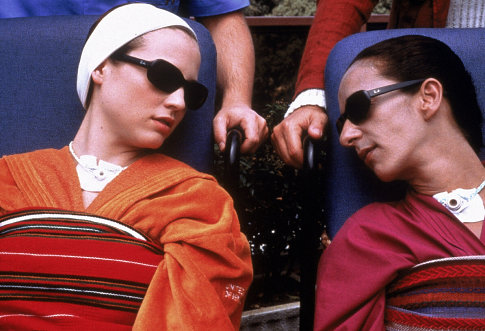