STORY OF A PROSTITUTE (SHUNPU DEN)

“Give me a Suzuki yakuza film anytime.”

A challenging story on military life and the life of a prostitute, as seen through her eyes. It’s based on the popular novel by Taijiro Tamura, and is written by Hajime Takaiwa. Maverick director Seijun Suzuki (“Branded to Kill”/”Tokyo Drifter”/”Pistol Opera”)keeps it tense and eloquent.

In 1937 when prostitute Harumi (Yumiko Nogawa) is rejected by her upper-class lover, who marries a respectable woman, she bolts from working in the Chinese city of Tianjin to volunteer to serve as a “comfort woman” for a Japanese battalion fighting at the Manchurian front. The sadistic Lieutenant Narita (Isao Tamagawa), the company commander, mistreats her and keeps her as his woman servant, as she also serves the sexual needs of the other soldiers. But Harumi falls in love with Narita’s sensitive orderly, Corporal Mikami (Tamio Kawaji), and their affair brings about tragic consequences for both and depicts how military life is de-humanizing.

The black and white film though well-executed and acted, never moved me as much as it should have. The film is meant to criticize the Japanese military for their rigidity, brutality and misplaced loyalty to their traditions of self-sacrifice. Give me a Suzuki yakuza film anytime. 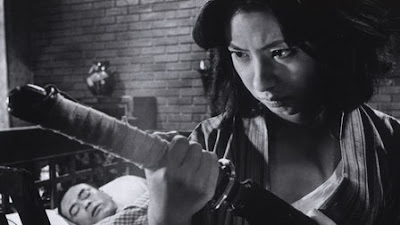 LADIES ON THE ROCKS