“John Ford’s splendid film was considered to be the first modern Western, one that went a long way in influencing the genre.”

John Ford’s splendid film was considered to be the first modern Western, one that went a long way in influencing the genre. It also marks the beginning of a great and long partnership between Ford and John Wayne, as the Duke found a director who always made the star the center of the screen and the partnership benefited both men greatly. In Stagecoach, the film never takes its eyes off the Wayne character when he’s onscreen, as most of the narrative is filmed from within the stagecoach and the location remains unimportant–it could be anywhere since Ford could care less about the setting. It was Ford’s first film in Arizona’s Monument Valley, a location he was to use repeatedly in over a quarter of a century of filmmaking–proving location and the country didn’t matter much to him, as he was satisfied showing the same mesas for all his pics.

What Ford does well is draw his action story around a diverse group of richly portrayed characters who are on a stagecoach set to leave Tonto, New Mexico for a wilderness settlement in Lordsburg. The story is based on Ernest Haycox’s short story “Stage to Lordsburg” that was influenced by de Maupassant’s tale “Boule de suif.” Dudley Nichols penned the screenplay. It was the first Western Ford made in 13 years, since that genre was in decline from its heyday in the silent era.

Noted film critic Andrew Sarris hit the nail on the head when saying Stagecoach’s greatness was in the “Double Image, alternating between close-ups of emotional intimacy and long shots of epic involvement, thus capturing both the twitches of life and the silhouettes of legend.” The passable narrative was fine, but it was those thrilling visual effects and the raw power of the heroic Wayne that breathed new life into this genre.

Aboard the stagecoach are the stereotyped six passengers and two easily recognizable Western types who are the usual stagecoach workers (all the characters are supposedly a cross-section of society). The passengers are all a pack of social outcasts, who will eventually reveal their true nature they are hiding. Dallas (Claire Trevor) is the virtuous whore with a scandalous past who has been banished by the pious town ladies; Lucy Mallory (Louise Platt) is the snobbish pregnant wife of a cavalry officer stationed in Lordsburg who is determined to be at his side because of her condition; Hatfield (John Carradine) is a cynical silver-tongued Southern gentleman and professional cardsharp who claims to be along to “protect” fellow southerner Lucy, although he seems to have ulterior motives such as romantically moving in on her; Dr. Boone (Thomas Mitchell) is a homespun philosopher, a drunkard, and a physician who lost his license; Mr. Peacock (Donald Meek) is the meek whiskey salesman destined to be friends with the doc; Gatewood (Berton Churchill) is the crooked blowhard banker fleeing town; Buck (Andy Devine) is the comedic backwoods stage driver; and, Sheriff Wilcox (George Bancroft) is the straight-shooter along to protect the stage from the Ringo Kid (John Wayne), an outlaw with a bad rep who has just broken out of jail.

There’s a great tracking shot that introduces Wayne, with him looking posed like a statue, twirling his rifle, and the shot ends on a penetrating close-up of his intense face. It soon becomes apparent that he escaped to seek revenge for the murder of his father and brother.

Before the film ends Wayne becomes the hero, risking his life to save the stage from an Indian attack by Geronimo when he easily could have run away. The Indian attack is the film’s centerpiece of action. In another of the film’s famous action shots, the strapping Wayne kills the three Plummer boys in town with a carbine as he was falling to the dusty street and thereby settles his old scores. Wayne’s gallantry and moral convictions wins the day, as he gains the love of the good-hearted Trevor and the respect of the sheriff who refuses to arrest him. Instead, he sends the redeemed pair into the wilderness where they’ll be saved from the so-called blessings of civilization. 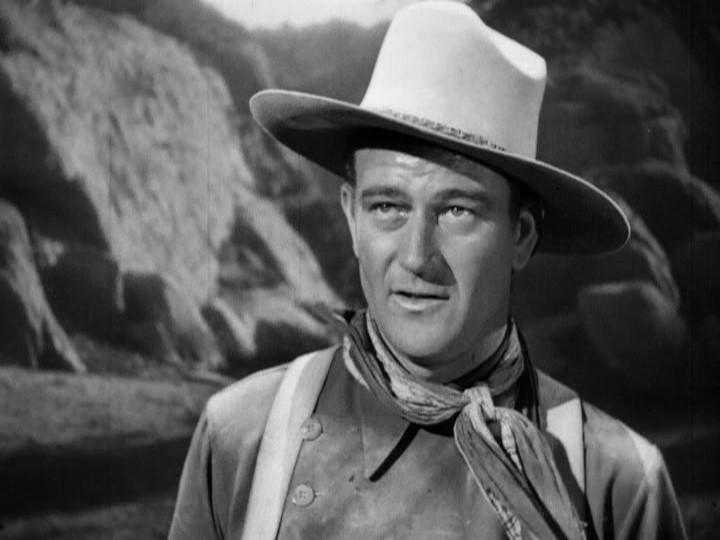