Jan Martin (Virginia Vale) is the sister of government chemist Paul Martin (Hugh Beaumont). At the Panama airport, Jan realizes she’s being followed when going to meet the arrival of her brother Paul and instead greets a stranger named Mike Lawrence (Roger Pryor). This fools enemy agents Lake (Warren Jackson) and Wilton (Jack Ingram), who then plot to kidnap them. The pair escapes their would-be captives. Jan signs on as a cafe singer, disguised in a black wig and assumes the name Dolores. Mike will follow Jan and when he locates her without make-up in an alley, another enemy agent, Raynor (Lucien Prival), trailing Mike, goes after them. But they escape. When the enemy agents eventually capture them, they realize Mike is not her brother. Things conclude when we learn the spies want to get a camouflage paint for planes that Paul invented, but are thwarted by Mike’s heroics. The best thing about this B film is its tagline:”One night she’s a glamorous blonde…the next a Latin brunette.” 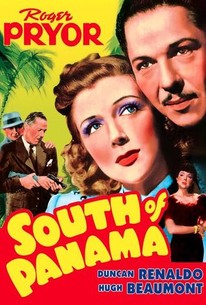