A WW11 German soldier, Stroszek (Brogle), during the occupation of Greece, towards the end of the war, is wounded 4-weeks after landing there. While recovering from his wounds in the hospital the handsome soldier marries the Greek nurse, Nora (Athina), who was treating him. His superiors decide to send him to this safe haven, the island of Kos, where he will rehabilitate in a house taken from a Greek family, with two other wounded soldiers, Becker (Ungern-Sternberg) and Meinhard (Reichmann). In civilian life, Becker is a classical scholar. Here, he suffers from constipation. The belligerent Meinhard, who is a crane operator in civilian life, acts as his antagonist.

This is Werner Herzog’s first feature and it is a conventional story, unlike the unconventional path he was to follow in his career to date. “Signs of Life” is an interesting drama even if it is a somewhat heavy-handed metaphorical one. It relates the mental breakdown of Stroszek, as he can’t come to grips with the irrationality of war.

There is nothing for the soldiers to do on this barren island, with its torrid Greek sun bearing down on them, which makes their stay here seem like an imprisonment. The island is occupied by their forces to guard a valueless munitions site. The Partisan Army doesn’t even attack this island. So the men, stuck here indefinitely, search out things to do so that they don’t go crazy: they paint the house; Meinhard builds a device to trap the cockroaches that he animatedly detests as useless creatures, deserving their cruel fate; and, they try their hand unsuccessfully at raising goats. When one of them finds some gunpowder, Stroszek teaches them how to make rockets. But he is going off on lethargic mood swings, where he can’t function for long periods at a time. His marriage seems to be based solely on a physical attraction, where it is not only the language barrier that keeps him uncommunicative with his wife but there seems to be, also, a total lack of understanding for each other.

The Gypsy (Pinheiro) is an interesting diversion for the men. He comes upon their house and tells them he is a king, probably born in Portugal, who has lost his tribe, and is now in the process of searching the whole world for his people. He engages them in conversation, shows them a card trick and blends in with the island’s other inhabitants. But the soldiers don’t buy into his story, even though his life story is probably more real than theirs.

A Turk, who is a Greek resident (Achmed), fully translates for them the stories they are reading about Kos on the walls of some of the abandoned castles, which claims that the island was once ruled by pirates. He also complains that he can only pray three times a day instead of the customary Moslem five, because the people on the island interfere with his practice.

A piano player plays Chopin and tells how the composer was really mean in his music contrary to the way most interpret his work. Chopin’s music seems to have a dizzying affect on Stroszek, who is beginning to show some serious signs of mentally cracking.

Stroszek’s mental breakdown goes over-the-top when the men go out on a patrol mission and discover a field of windmills, which the disturbed soldier starts shooting at. Finally he goes berserk when back in the house, grabbing a rifle and shooting at his wife and the two soldiers. He chases them all the way to town, where he kills a donkey and then proceeds to take over the munitions site threatening to blow up everyone on the island. At last, he is captured, and order is restored to the war effort.

Herzog’s characters exhibited many bizarre human touches, certainly different from the way Nazis were portrayed in most American films. These soldiers seemed like flawed human beings, trapped by the environment they were in and their own idiosyncratic nature. 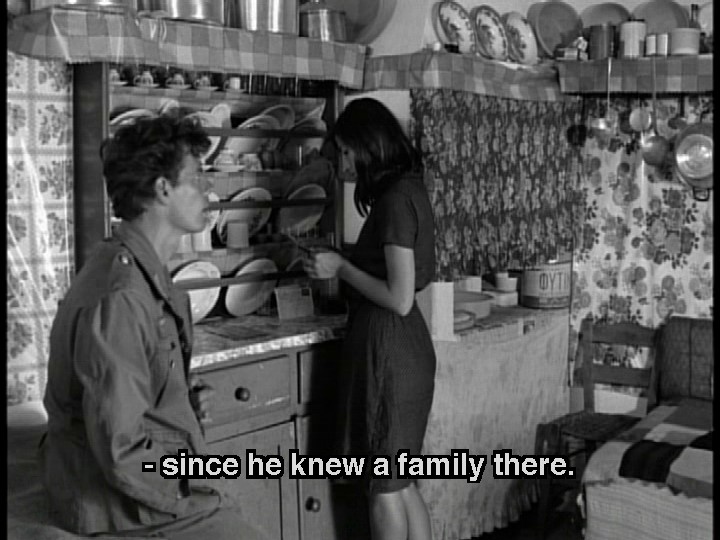