“This is a thriller where a murderer performs not one train wreck or two, but three.”

This is a thriller where a murderer performs not one train wreck or two, but three. Two glib Americans, one a private detective named Harwood (Lowe) and the other a perky insurance investigator, Caryl Fenton (Cummings), get involved with the murder case when the drunken Harwood, costumed as a devil at a ball in Nice, finds a dead body and when he calls the police the body is missing.

Fast-paced action and witty one-liners, allow this Hitchcock-like story to be both amusing and thrilling. And the surprise ending is a beaut, which should catch you off-guard, as you will most likely be misled and unable to guess who the murderer is.

Lowe and Cummings are even funnier than the Thin Man couple (William Powell/Myrna Loy) as they constantly go at each other with gibes and churlish remarks, with her being anxious to get him to go back to Scotland and recover some stolen jewelry and to start working on the case they are both assigned to. With her nagging him to hurry up as they rush to catch the train, he tells her: “It takes him one minute to strip and one minute to dress, that she should wait for him, he’ll see her in a minute,” as she responds: “You better make it two.”

Boarding the Paris express, the two Americans are in the film’s first train wreck. After telling the French police investigator, Monsieur Paul Turbé (Thomy Bourdelle), about the wreck and the dead body found, Harwood boldly bets him $5,000 dollars that he will catch the murderer. The victim is identified as a Heinrich Wagner (Allan Jeayes), with a connection to an Argentinean living in London named Axel Hoyt (Oscar). Harwood discovers a letter on the dead man and an earring with a unique design.

In London the couple find Hoyt to be wary of them and when they return to his flat in the evening, he is gone and someone from across the street is firing on them. The Americans start putting two and two together, uncovering a photo of Wagner attending a Guild dinner in 1931 with Hoyt and a woman identified as Elizabeth Wentworth (Joyce Kennedy). So they attend a charity affair given by an organization called “Pilgrims of Peace,” where they find and question Wentworth and get her concerned that they are on her trail.

Suspicious of Hoyt, the two Americans track him down through the registrar’s office and find out that he is legally declared dead as his certificate was officially signed by a doctor. Confiding with Turbé, they tell him they are going after the doctor. But the doctor’s housekeeper tells them that he left suddenly after receiving a call and just caught a train. Hoyt is killed when the second train wreck occurs, as his train plows into a lorry that was stuck in the middle of the tracks.

Uncovering another earring on the dead doctor to match the other is all the proof needed for the Americans and Turbé to realize that this is the same design that Wentworth and the charity group leader, Sir Charles Webber (Felix), have for their logo. They also figure out from the criminal rap sheet on Hoyt, that he’s a gun smuggler and that their organization is probably running some kind of scam. They also discover on stage at the “Pilgrims of Peace” benefit, that Hoyt is there posing as a reverend.

The film concludes with the third train wreck, as all the remaining characters involved in the plot are on board. The ever confident Harwood tells Turbé, he will get the murderer and he should be prepared to make an arrest when he is given a signal. 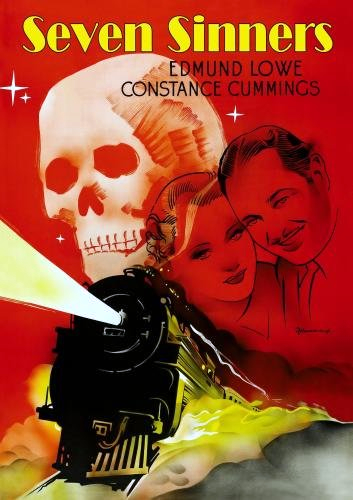