Writer-director Simon Barrett, a former top-notch horror screenwriter (wrote the excellent “The Guest” and “You’re Next” for the Adam Wingard series), in his feature directorial debut offers a routine old-fashioned horror film painted-by-the-numbers about the possibility that an upscale private high school’s urban legend might be true. Its absurd climax brings the film down a super-natural, bloody, slasher road.

It was Alice’s clique who held a seance and pranked Kerrie into believing the group was communicating with the spirit of a suicide student from long ago, in the 1990s, who supposedly returned as a ghost bent on vengeance. The upset Kerrie retreated to her dorm room and in an apparent suicide falls out of her dorm window. The school officials are adverse to controversy, and call it an accidental death.

Meanwhile Alice discovers her clique is being bludgeoned one by one, seeming having unleashed something evil over its hoax seance. The following fatalities occur: Yvonne gets stabbed while doing a dance number, Lenora gets stabbed while walking outside and Rosalind is attacked in the shower.

For some reason, Alice’s group all suspect the mysterious Camille as the killer. The superstitious Alice however believes that the ghost of a former student killed has returned as the killer.

But the truth of who the masked killer is, when revealed, is so ridiculous, that the slasher film (even if directed by a lover of this genre who has put together a few good set pieces in this film, is such a bad idea that the film can’t recover). It just becomes unintentionally funny as a below average horror pic. Its bland cast, with a wooden performance by its star Waterhouse, can’t save it from film purgatory. 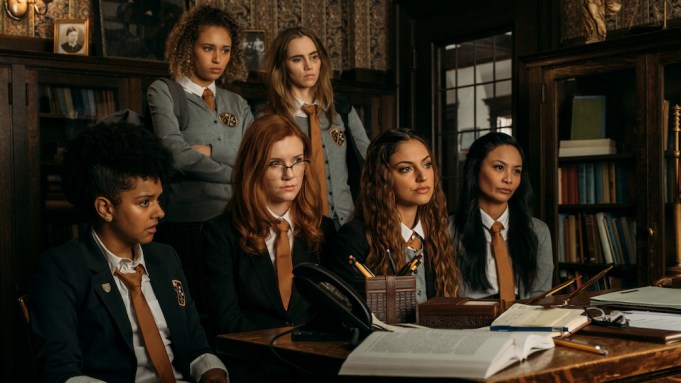