“The three biggest superstars in the horror genre are in this film.”

The three biggest superstars in the horror genre are in this film, but they are not seen together until Price and Lee appear briefly in the very last segment. Vincent Price is Dr. Browning, an insane scientist. Christopher Lee is Fremont, the head of British Intelligence. Peter Cushing is Maj. Benedict Heinrich, head of a fascist government. They are in a horror film that shows little affinity for the genre and apart from a few scares this is a rather tepid effort, suffering mostly from half-hearted direction.

Scream and Scream Again was based on Peter Saxon’s novel ‘The Disoriented Man,’ but it is the story that seems more out of whack than the title.

The film opens chillingly enough, as a robust jogger is seen on the road gracefully running and then suddenly is having a heart attack. The scene intercuts to his waking up and screaming in a hospital bed and finding his limbs have been removed. Each time the film cuts back to him a robotic-type of a nurse treats him, insensitive to his screams, as he discovers he keeps losing another limb.

What remains constant is confusion. A crusty veteran police inspector, in charge of a grizzly murder investigation, Bellaver (Alfred Marks), discovers that he is dealing with a psychopathic rapist-killer. Going over the lab results of the strangled and mutilated girl who was found in the woods with his new lab pathologist, David Sorel (Christopher Matthews), he discovers two vampire puncture marks on her wrist. When another girl is found killed in the same vampire-style and her jugular vein is burst open but similarly no blood is found on the scene, the police realize that there is something strange. They decide to go after the serial killer by having a policewoman wired with a mike and used as a lure for the killer at the same disco the other two girls were picked up. Incidentally, the loud music coming out of the disco is played by a group called The Amen Corner.

In the film’s most animated sequence the mad killer, Keith (Michael Gothard), is trapped by the police after showing inhuman strength and overpowering four of them to escape to the top of a rock quarry. When captured he is securely handcuffed to a car, but escapes by pulling his hand off and running toward the house of the mysterious Dr. Browning. There he immediately flings himself into a vat of acid. Bellaver orders one of the pursuing cops to stick his hand in the vat, thinking it was only water, to retrieve the killer’s body. He instead ends up losing his arm.

Bellavar has been ordered to stay away from the respected Dr. Browning, who is respected enough to even have a government research contract. The case is now officially closed. But Sorel is not satisfied, believing that Dr. Browning has something to do with these murders. He gets the help of another policewoman and goes out to Browning’s house to investigate. Unfortunately she gets caught snooping and is taken to Browning’s hospital lab to be prepped for an operation, while Sorel gets caught by the good doctor inside the lab and is forced to listen to an explanation about what all the murders were about and about the master race Browning is creating. Keith, the vampire killer, was a composite, who is not human but made up of body parts from others and has no feelings for pain. The result is a race of emotionless and mindless androids. There are many others that the scientist has created in his lab but they are more closely akin to being robots, as he apologetically explains my group is only in its infant state. He says it’s a fascist type of government with plans for world dominance.

Warning: spoilers in the next two paragraphs.

While this was going on another composite of the master race, a fascist in some unnamed European country, Konratz (Marshall Jones), kills his superiors in his own government (he kills the Peter Cushing character off). Konratz has made a deal with the British government that he will return a downed pilot of a spy plane and for that he will be given the evidence collected by the police in the vampire murder case. When Bellaver refuses to let the Nazi take the evidence with him, even if this has been approved by government higher-ups, the star detective of the film is killed as Konratz puts two fingers on his shoulders and, presto!, Bellaver crumples to the floor with blood oozing out of his mouth.

When Sorel is about to be ripped apart by the insane Dr. Browning — Konratz enters the lab and the two androids of the master race fight, with Browning putting Konratz into the acid bath. Then Fremont, head of the British Secret Service, also a composite of the master race, decides Browning’s usefulness has come to an end. He tosses the bad doctor into the conveniently placed acid vat. The film ends with a cryptic warning by Fremont that all is not over with yet.

This muddled story is not supposed to make sense and it doesn’t; it is supposed to shock your senses and if you were shocked, I suppose you got your money’s worth. There is no real character study. The story never says much about the activities of a secret police force or the Nazi type of diabolical scientific experiments. The dialogue ranged from being trite to ludicrous. Though, it should be a fun film for the fans of the three major horror stars. 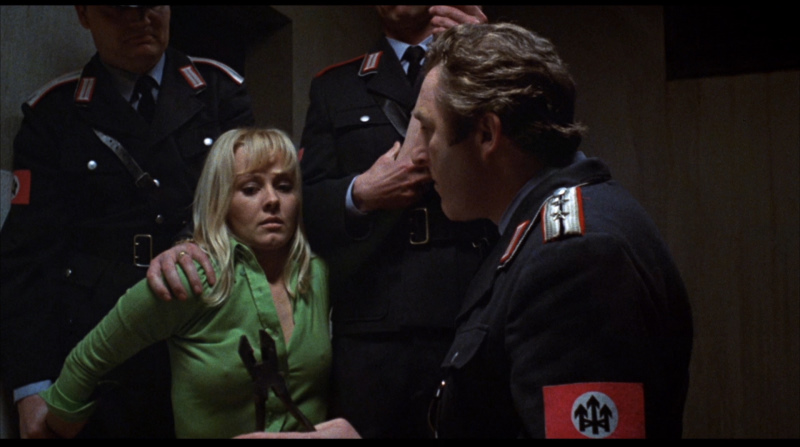