“A terrific film, one of tremendous visual beauty, but one that steers clear of any overt political messages.”

Transplanted Vietnamese director Tran Anh Hung, the 31-year-old now living in France since 1975, makes his debut film into a lush and lyrical story about a peasant girl, Mui (Man San Lu-age 10). She comes from her country village to Saigon in 1951 to be a servant in a bourgeois household consisting of–the old servant (Nguyen Anh Hoa), grandmother (Thi Hai Vo), three sons (Gerard Neth/Nhat Do/Keo Souvannavong), the master of the house (Ngoc Trung Tran), and his wife (Thi Loc Truong).

“The Scent of Green Papaya” is a quiet, sensuous, apolitical, slow-paced film which makes it a point to clearly detail the everyday existence in the Vietnam of the rich and their servants in the 1950s, and it is also about the changing life in Vietnam (filmed, amazingly, on a Paris indoor set); it views the changes from the old ways to the changes incurring due to the influences from the West that came in the 1960s. It traces in particular the aspects of women’s work and their servitude that covers a 10-year period — from 1951 to 1961. It is seen through the eyes of Mui. She absorbs the serene music played in the rich household by the father on the lute and his eldest son Trung on the flute. Mui is a sweet girl with a radiant smile, who finds satisfaction with her lot in life as a poor servant.

Mui is shown her duties by the old servant, who carefully shows how to prepare the papaya (which is traditionally woman’s work) and answers all the child’s curious questions about the household. The child will also serve the meals, clean the house, wash the clothes, and run errands. The mistress of the house is especially fond of her and treats her with utmost kindness as she reminds her of the daughter she lost to a disease, who would have been the same age as Mui. The master of the house is guilt-ridden because his daughter died when he ran away from home and he only returned after her death, and was sickened so much over that incident that he promised not to take off again. He has a history of disrupting the family by periodically disappearing with the family savings for long periods of womanizing. He causes much pain for his hard working wife, who earns money for the household by selling cloth. Because of this the young child Tin, in particular, acts unruly, taking it out mostly on Mui.

But Mui seems oblivious to the family tragedies, as she keys in on the simple pleasures of life. She loves cooking the papaya, doing her chores in an unobtrusive manner, and tuning in to the wondrous nature around her.

Mui is attracted to a rich friend of Trung’s, Khuyen (Hoa Hoi Vuong), someone who is a classical pianist and frequently visits the house for dinner. The first part of the film ends as the family suffers the loss of the master who kept his word for seven years, since the death of his daughter, but now has run away with another woman, taking with him the household money.

In 1961, ten years after the master’s death, the 20-year-old Mui (Yên-Khê Tran-the director’s real-life fiancée) is still content working for this troubled family but she is let go because of economic reasons and will become the servant to Khuyen. She will now prepare the papaya with a more womanly intimacy and an engaging relationship grows between her and him, as he finally notices the servant is an alluring woman. The second part of the film pales in comparison to part one, and that is because the innocent Mui as a child was the glue that held the film together and made it seem so special. The older Mui doesn’t radiate the same warmth on the screen.

This is a very pleasing and subtle tale about the strength of the human spirit and the artistic quietude one has when finding peace within one’s self. It is about a traditional culture that is no longer common, if it exists at all, since the Vietnam War. A terrific film, one of tremendous visual beauty, but one that steers clear of any overt political messages. At Cannes, it was named the best film by a first-time director. It also received a nomination for Best Foreign film at the Oscars. 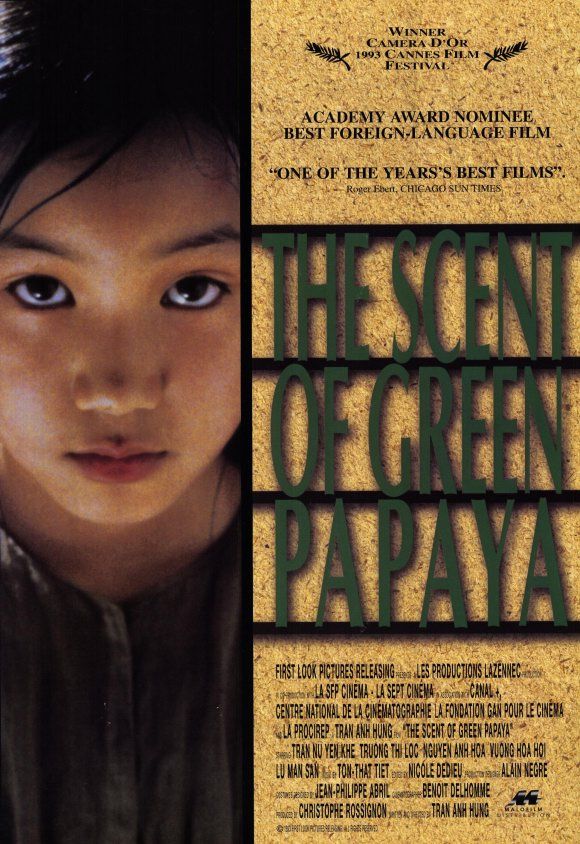