“A loopy tale about a superstitious widow’s quest to find her 12-year-old daughter.“

A loopy tale about a superstitious widow’s quest to find her 12-year-old daughter Blanca. One of the problems facing that search is that Blanca died in Veracruz’s small town of Tlacotalpan’s hospital from a mysterious viral infection after checking in for a tonsillectomy, but that doesn’t convince her pious mother Esperanza (Dolores Heredia) because she was not allowed to see the body for fear of contamination and when she returns the next day to get Dr. Ortiz to exhume her body for a forensic investigation–the good doctor has vanished without an explanation. While cooking in the apartment she shares with her fellow widow Soledad, Esperanza sees in the grimy glass oven window St. Jude appear as an apparition and he drops the hint that her daughter is still alive. She scampers to the church to give her confession to Father Salvador, telling him what Saint Jude laid on her. The kindly Father, more interested in watching the soaps on TV than listening to dopey confessions, cautions her for now to keep this miracle to herself. But she can’t resist telling Soledad, who thinks she’s gone batty. And, so develops an arduous tale of a bereaved woman’s incredulous amateur detective investigation, love for a lost one, faith, and self-discovery. But the real theme might be that one can never underestimate the gullibility of religious worshipers, who look upon icons with the same fervor as fans of pro wrestling look upon their heroes.

Esperanza is comfortable at home with her altar of religious statues, votive candles, rosaries, and pictures of saints. In the real world, she’s ripe for all kinds of delusions. Consulting a host of other saints to guide her, she opts to search anywhere in Mexico for her daughter when Father Salvador thinks it might have been possible that the pretty girl was kidnapped by Dr. Ortiz and sold as a sex slave to a brothel. Unbelievably, even for a fable, Esperanza takes jobs in various brothels prostituting herself in an attempt to find her daughter at any cost. Her Candide-influenced adventures take her to the faraway brothels of Tijuana and even to Los Angeles, where her lack of success in finding her daughter brings unexpected success in landing a man. She falls in love with the good guy pro wrestler Angel Galvan, whose professional handle is the “Angel of Justice.” The two are a match made in heaven, or from a script that so shamelessly tugs at the heart strings — it’s a match unmasked in the world of cinematic feel-good fancy. This romance makes her realize she’s a woman in need of love, and thereby her mood changes reflect her new gayer appearance as she goes from wearing black to brighter colored dresses. All the while traveling she keeps contact with the puzzled Father by giving him through long-distance phone confessions of her sexual escapades, and surprises him further with a return visit to the church. A new set of plans arises when her oven window was cleaned by Soledad and she no longer receives visits from the saints (this was just too hokey to buy into).

To its credit, the film never goes for the easy jokes it could have had at the delusional but innocent woman’s expense, as it aims to follow one of William Blake’s poetical dictum’s “following one’s folly is a way of getting to the truth.” I don’t think this whimsical tale had enough staying power or weight to be anything but cutesy, as I found the story lacking in too many good storytelling essentials to be more than slightly engaging. It takes stupidity to new heights of relevance. It is too dumb a tale to be taken seriously and just didn’t jibe as a comedy, especially since it so wanted to be taken seriously.

It’s a film by Alejandro Spingall from a script by Maria Amparo Escandon that she developed from her novel at the Sundance Screenwriters’ Lab. It’s meant to be like a folklore fable and in an artsy-fartsy way be beguiling. It was the winner of the Jury Prize in Latin American Cinema at Sundance, 1999. 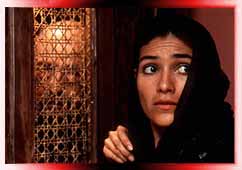