“The subversive surreal pic, a revolt against convention.”

It tells in its own twisted way the NT story of Salome, the whorish daughter of queen Herod. She was lusted after by her depraved stepfather, King Tetrac. When her attempted seduction of the visiting John The Baptist fails, she agrees to satisfy her stepfather’s perverted whims through the infamous dance of the seven veils. She then demands that Tetrac return the favor by beheading John The Baptist.

The pic is inspired by Oscar Wilde’s scandalous French written 1893 play. Eccentric Italian writer, director and actor Carmelo Bene (“One Hamlet Less”/”Our Lady of the Turks”/”Don Giovanni”), gives us his even more irreverent version of the Bible story than Wilde, that among many controversial things has Christ unsuccessfully in a comical way trying to nail himself to a flashing neon cross.

It’s an acid trip experimental movie, meant to shock audiences and have them muse over how we can’t communicate with each other–as the actors shout their lines throughout. It includes at least one porn scene, a host of weird characters parading around in scantily beaded-jewel costumes made from neon and who appear on exotic water stage sets, an animation camel for some inexplicable reason repeatedly jumping through a loop (the eye of a needle), glaring unforgettable garish visuals, extreme close-up shots that linger like the other shots for a maximum of five seconds, constant head music and spectacle to keep us dazzled, John the Baptist and the femme fatale Salome seriously engaged in a cartoonish yelling match and every time he fails to respond to her seduction her servant hits him on the noggin with a book, Salome’s scandalous dance of the seven veils, from time to time girls with naked asses being gently spanked with feathers, your atypical man either eating a live sheep or someone feasting on a watermelon, vampires introduced via fangs on some of the characters biting on the necks of their vics, a host of perversions filmed as a rich satire on heterosexuality and, of course, some titty shots.

The subversive surreal pic, a revolt against convention, can be loved or hated for its perversions, but though there are many versions of Salome none are as strange. 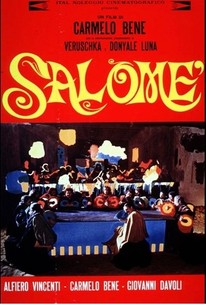 BLOW THE MAN DOWN