“This film is a critic proof one that’s geared for the kiddies, Yankee fans and those who hero worship ballplayers.”

This film is a critic proof one that’s geared for the kiddies, Yankee fans and those who hero worship ballplayers. Anyone else might not be as easily pleased by a film that could readily pass for a NY Yankee publicity film. It features Mickey Mantle and Roger Maris, the idolized M & M boys of the championship NY Yankees. They just came off a season where Maris broke Babe Ruth’s home run record and Mantle was considered the top ballplayer in the majors. Veteran TV director Walter Doniger (“House of Women”) directs with charm this sweet children’s sports drama, with an eye out for keeping the fantasy alive for its target audience about how great it is to be a ballplayer. The film exists for no other reason than to exploit the popularity of the two superstars and cash in while they are still a hot commodity. The M & M boys might have great magnetism in their athletic world but as actors they were both stiff and seemed uncomfortable under the lights, furthermore the slight story didn’t offer much of a challenge. But, on the other hand, the live appearance of the popular sluggers showed them to be nice guys who possessed a sense of decency and common sense, and are worthy of being idolized by the youngsters (parents can’t complain about them wrongly influencing their kids).

Hutch Lawton (Brian Russell) is a precocious ten-year-old who recently moved from New York to the coast of Florida with his widower father Ken Lawton. Dad runs a charter fishing boat and is too busy to attend Hutch’s Little League games. When egged on by an obnoxious fellow Little Leaguer named Henry that his dad doesn’t know anything about baseball as the main reason he doesn’t attend the games, Hutch brags that Maris and Mantle are good friends with his pop. His Little League coach overhears the conversation and asks the kid to use his influence with the stars to get them to attend their Little League banquet; feeling backed into a corner, Hutch promises to deliver them. When dad’s away fishing an embarrassed Hutch tries to make his promise come true, as he hitchhikes a ride to the Yankee spring training camp at Fort Lauderdale. He sneaks into the clubhouse and meets Maris and Mantle. When he tells them his story, they wisely but graciously refuse to be part of his deceit. The boy interacts with his heroes through the gruff but grandfatherly coach Bill Turner (William Frawley, his last film role). Dad returns home and learns from his older adolescent son where Hutch has gone. At the ballpark, dad and his new bride to be reunite with their son and become overjoyed that the M & M boys have invited the Little Leaguers to join them on the field for spring training practice. 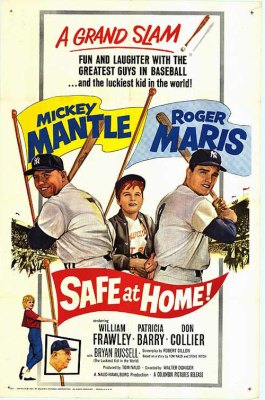