“… somehow can’t get its feet on the ground to tell its story without hitting you over the head with its adolescent charm.”

A modern screwball comedy that is bursting with good ideas for both comedy and dramatics, but somehow can’t get its feet on the ground to tell its story without hitting you over the head with its adolescent charm. The talented director Wes Anderson (Bottle Rocket/Rushmore) has proven to be an interesting young filmmaker who takes chances and doesn’t rely on formulaic scripts, and is someone who should be admired for his ambitious plans in this venture more than the results. In the end, the film suffered from trying to be too cute and quirky without drawing out too much comedy and by short-changing the drama. The film had a hollow intellectual feeling to it throughout. It seemed to be the work of a director who is showing off how clever he can be, without letting the story become more heartfelt on its own terms.

The fantasy New York City depicted consists of richly ornate brownstones and swank limestone hotels and buildings. It takes us into richly decorated brownstone rooms with mahogany furniture and lush red velvet furnishings, and outside to NYC gypsy cabs and the Green Line bus as its favorite means of transport. There’s also a Y located on the fictional 375th street that is used as a contrast to the rich lifestyle of the Tenenbaums, where the story’s failed hero must now reside after his downfall. All these locations set up a colorful background for the eccentric Tenenbaum family to operate in, whose con man patriarch Royal (Hackman) is three-quarter Irish and one-quarter Hebrew–which goes along with the multi-cultural theme it presents of this century’s changing American family characteristics.

The main focus is on the manipulative and cruel Royal, who tells his story of regret that he wasn’t a good father and is now trying to see if he can reconnect with his children whom he hasn’t seen the last 22 years as he tries to make things right again.

The film is narrated by Alec Baldwin, seemingly as if this was a literary presentation. It’s told in the form of a book being opened to chapters about this brilliant family, which consists of three child prodigies (all different archetypes): Chas (Stiller), Margot (Paltrow) and Richie (Luke Wilson, Owen’s brother). Chas became a financial whiz at age 7; Margot, the adopted child, became an award-winning playwright when in elementary school; and, Richie, papa’s favorite, became a national tennis champion at 17. These child prodigies blossomed at an early age, but have all recently fallen upon personal failures.

The family was abandoned by Royal and was raised by their over-nurturing mother, Etheline (Anjelica Huston), who has never divorced Royal. Her longtime friend is also her accountant and bridge partner, the well-dressed and prosperous landlord, the African-American widower Henry Sherman (Glover), who has surprisingly asked her to marry him. This is something she said she would think about.

At this time Royal is being kicked out of the Lindbergh Palace Hotel, where he has lived for the last 22 years except for the time he spent in prison because of tax fraud. He was a malpractice lawyer who was disbarred and has now run short on funds. Royal concocts a scheme to get him back in his wife’s house with the trusted servant he brought back with him from a trip to India, Pagoda (he knifed Royal and then saved his life), and with his hotel’s bellboy, Dusty (he will impersonate a doctor to convince his wife that he has terminal stomach cancer and will die in 6 weeks). Also at this same time, all three children return to live with Etheline in their same childhood rooms because of impending problems they have. Chas is a widow who has become frightened of life expecting a disaster to strike at any moment and he brings his two young children with him because his own place has no fire sprinklers. Margot leaves her older husband Raleigh St. Clair (Bill Murray), a neurologist, who performs weird attention-getting experiments on a strange boy-genius named Dudley in order to write a best-selling book. Margot leaves to get more space for herself to think about her unhappy marriage (she currently spends most of her time locked in the bathroom) as she’s secretive in the hopes of finding her own identity and has not told the family that she once married a Jamaican for 9 days, has had many different types of lovers, and has smoked cigarettes ever since she was 12. Raleigh hires a private detective to follow her because he believes she’s having an affair, and she’s caught red-handed on camera with the eccentric drug-addicted novelist, Eli Cash (Owen Wilson). He’s a neighbor of the Tenenbaums from childhood who was enchanted by the family and always wanted to be a Tenenbaum. He writes books because he wants to be accepted by the family as a fellow genius and has remained best friends with Richie, whose tennis career went into a meltdown and now pines only for Margot. Richie returns from a stress-relieving cruise to stay with his security-blanket mom and sulk about not being with Margot.

The characters were more cartoonish than real and never connected with the flow of the story but seemed to be merely putting on a quirky show for the sake of being quirky. The comedy was taken out of Bill Murray’s dry role, while Luke Wilson never seemed appealing or going anywhere with his bizarre characterization. As for Owen Wilson, he wrote himself a tiresome character to portray. Without the narrator, this film wouldn’t have been able to connect all the dots it presented.

Gene Hackman is the film’s main staple and he’s such an accomplished actor, that his is the only role that doesn’t seem paper-thin. He does it with a gesture here and there, a quiet look, or with the wicked smile of a rogue who doesn’t seem all that bad when he confesses he’s a cad and continues to hustle. He shines best when he has his two grandchildren in tow and teaches them how to have fun in life by being reckless. They cross in traffic against the light, throw water balloons at a passing cab and shoplift in a grocery store. Gwyneth Paltrow has a bewildered look throughout, as she underplays her neurotic role and in no way connects with anyone else in the film. The same could be said about the Danny Glover and Anjelica Huston roles, as their characterizations could have been saying something big but somehow never got around to saying it just right. While Ben Stiller plays a one-dimensional role of the overprotective parent of Ari and Uzi, and whose Oedipal angst is constantly aimed at Royal in an annoying and unfunny way (He hates Royal because he stole money from the trust fund he earned as a child). I wanted to like this film more than I did, as I think the performers were up to their tasks and there was something in the story about how families can’t relate because they don’t know how to honestly communicate with each other that is worth hearing. It also could be a story about those who achieve success too early in life and then inevitably fail without knowing how to recover. But the problem I kept having, was that I didn’t think this was a real family but a bunch of individuals who couldn’t connect with one another or with the audience. I therefore saw the film as an awkward sketch of individuals with too many quirks who were left hanging out to dry waiting for laffs.

The music track has some of the following solos and groups playing in the background: Nico, The Velvet Underground, The Stones and the Beatles singing their rarely played “Hey Jude.” The music was just fine. Anderson’s film was co-written by his University of Texas friend, actor Owen Wilson–as these two broke into film together and have still not outgrown working on their themes of adolescent rebellion, insecurities and bittersweet memories. 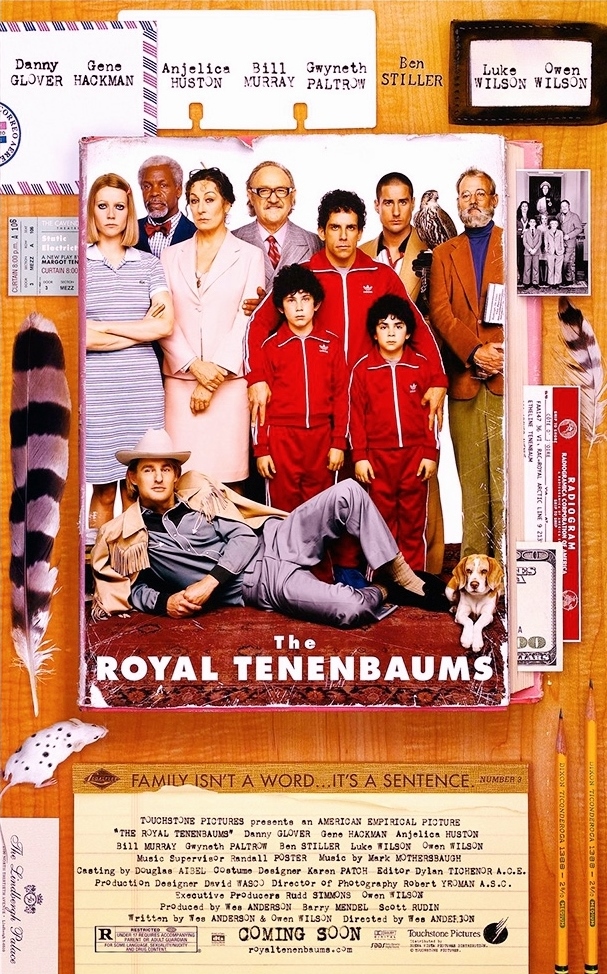