ROYAL HUNT OF THE SUN, THE

Irving Lerner (“Studs Lonigan”/”Murder by Contract”/”City of Fear”) directs this inaccurate but nevertheless visually enticing historical drama about the Spanish conquistadors in South America, as they make a third and final trip across the unsafe Andes Mountains to Peru. It’s based on the imaginative play by Peter Schaffer, and is ably written in a literal way by its producer Philip Yordan, even if it can’t do much with some of the play’s richer possibilities of relating religious belief to materialism. Some Brit critics have said it’s an opera without the music.

The obstinate and determined General Francisco Pizarro (Robert Shaw), the Spanish soldier of fortune, for the third time arrives in Peru, the Land of the Sun, in search of the elusive Kingdom of Gold (El Dorado). King Carlos (James Donald) has ordered the brave explorer to bring along a couple of meddling priests and has left the conquistadors’ small army poorly equipped to fight off the multitude of Incas needed overcome the resolute Inca god-king Atahuallpa (Christopher Plummer).

In the end, the two leaders meet and overcome their initial mistrust and suspicion, and find much to admire about each other. But the moody Pizarro is unable to stop his legion from going back on their word and executing the captured god-king, whose powers are easily stripped away after his capture at Cajamarca by the superior foreigners. The god-king’s vulnerability is revealed as more human than god, as he unsuccessfully bargains away his treasures to save his life.

What can’t be denied is the pleasing performances by both Shaw and Plummer, who elevate the film above its pedestrian levels. 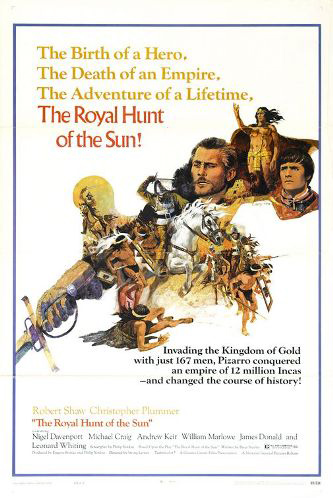