ROOM AT THE TOP

“Time has rained on its parade and it seems less daring when viewed today.”

One of the early British angry-young-man school of tense melodramas that time has rained on its parade and it seems less daring when viewed today, though it still has historical importance as a seminal British “kitchen sink” film. It takes pot shots at the following: the British class system, those who sellout to advance their ambitions, and the bleak reality of life in the industrial North of England. It’s billed as the first British film to deal seriously with sex. For its frank treatment of sex it received an X certificate in Britain. Jack Clayton (“The Great Gatsby”/”The Pumpkin Eater”/”The Lonely Passion of Judith Hearne”) directs in his auspicious debut and Neil Paterson pens the screenplay, which is based on the novel by John Braine.

Arrogant and ruthlessly ambitious government accountant, on a low-pay grade scale, Joe Lampton (Laurence Harvey), relocates from living in a small-town slum to a grim Yorkshire industrial city in England’s north country and immediately sets his sights on nailing upper-crust Susan Brown (Heather Sears). Her industrialist dad (Donald Wolfit), a self-made millionaire, is the most influential one in town.

Joe’s coworkers keep telling him she’s out of his reach and that he should stick to his own kind. But Joe joins the same amateur drama club she belongs to and steals the naive gal away from fellow upper-crust Jack Wales (John Westbrook). Her dad reacts by sending her off to the Continent. This leads our nasty and unlikable anti-hero to begin an affair with the French woman, Alice Aisgill (Simone Signoret), a member of the same theater group, who is a married woman 10 years his senior. When Susan returns the ambitious lad knocks her up and marries her and chucks Alice aside, even though he has come to love her and realize that she’s the one who is best suited for him, in order to carry out his cold plan to get to the top materially even if it means not following his heart, losing his soul and marrying someone he doesn’t love.

The crass anti-hero never stops having a chip on his shoulder because of his humble working-class background and his war years spent as a POW, and he indirectly causes the death of his real love by his callous actions.

It somehow remains entertaining and overcomes Harvey’s unpleasant one-dimensional performance, one that failed to convince me how he could get so-called Grade One women to fall for such a heartless rascal. Only Signoret’s performance as the hurt mature woman, locked into a loveless marriage and with a hubby who refuses to grant her a divorce, gives the film some emotional validity. 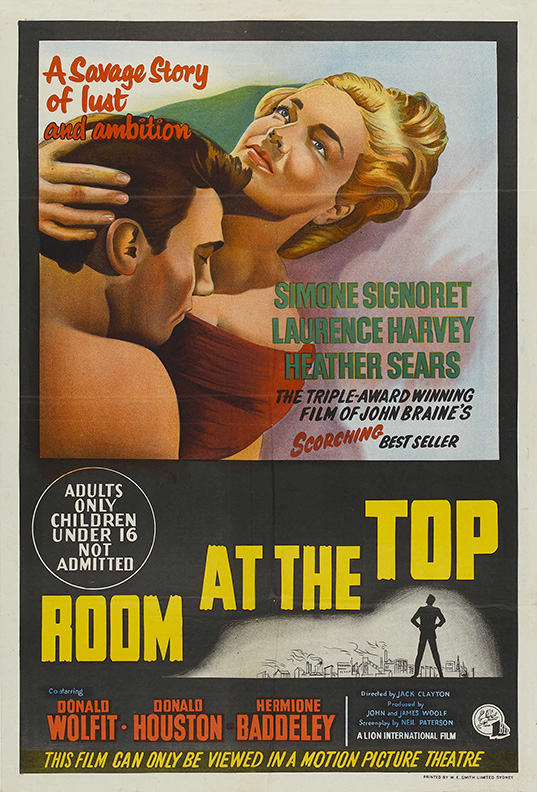