“The strong and silent naturalistic performance of Dennis Quaid scores a strikeout.”

One of the better baseball feel-good pics, though not in the same league with the more spirited “8 Men Out” or “Beat The Drum Slowly.” It’s based on the true story of Jimmy Morris, a high school science teacher in the depressed West Texas town of Big Lake, who at the advanced baseball age of 35 gets a shot at the majors and played two years as a southpaw relief pitcher with the Tampa Bay Devil Rays. He was never a star, but he at least did get to play in the Big Show. This one is full of inspirational messages ala “Field of Dreams” and plays on the familiar formulaic devises of the underdog sport team overcoming its losing image and going to the state finals and of the adult who gets another chance to make his youthful dream come true. Fortunately “The Rookie” only throws fastballs and no curves, so the square material is easy on the digestive system and through the strong and silent naturalistic performance of Dennis Quaid scores a strikeout.

Making it to the Bigs is a dream of many an American youth, as baseball which was once the national pastime is now in decline and finds itself competing with a number of other sports for TV market share and the public’s attention; nevertheless, it still has its fair share of dreamers. This is especially so since the minimum salary of a major league player is over $100,000 and the average player salary is over a million dollars a year. Numbers not to be sneezed at. “Rookie” plays on these dreams of fame and fortune to tell its hokey throwback story as filmmaker John Lee Hancock, from a screenplay by Mike Rich, knows how to tell a pleasing tale without getting too pushy or sappy about it. All the clichés presented go with the game and make the story seem more authentic, as the film always seems to know best when it’s running out of gas and it’s time to go to the bullpen for some relief.

Little Jimmy Morris dreams of playing baseball but he’s deterred by his cold military-careerist dad, Jim Morris, Sr. (Brian Cox), who is indifferent. The family after many moves from one army base to another ends up in the 1970s in rural Big Lake, Texas, a landscape dotted with oil rigs and a town whose only sports interest is football. The film now picks up from the point where Jimmy is happily married to Lorrie (Griffiths) and has a doting 8-year-old son Hunter (Jones) and a young daughter Jessie and a baby. He’s teaching chemistry and coaching baseball in the high school, where he’s respected as a great teacher and coach. The losing baseball team for the last three years doesn’t have a grass field until friendly yokels tell the coach how to stop the deer from eating the grass seed he planted, as they place human hair gathered from the floor of the local barbershop to cover the field.

The players get a chance to play on their beautiful new field and to see their coach pitch batting practice. They quickly realize their coach has a major league fast ball, and from there on the story becomes predictable. The team makes a bargain with their coach that if they win their division championship, he’ll try out for a major league team. Jimmy is concerned that his arm might not be able to take the pain since his baseball career was halted due to several shoulder operations, but is relieved to find no pain and that he’s throwing faster now than he ever did in his youth. When things jell and he tries out and gets a major league offer, he becomes concerned about not being able to support his family if he goes to the minor leagues and works for peanuts. He’s a good family man who doesn’t want to do something that’s foolish, and since he’s been offered a better paying job in the Fort Worth school system he would hate to lose that job and let his family down. When he goes back to his now divorced father for advice, he’s told: “It’s all right to think of what you’re doing. But there’s a time to do what you’re meant to do.” Which is another way of deterring him from his dream, just like he did when Jimmy was a youngster.

But fear not, Jimmy is blessed with an adoring and supportive wife; a hero-worshiping son; loyal students; a father who soon apologizes for his lack of support and now warms up to his plans; and, folksy townspeople who only wish him the best. The film ends on a high note, as Jimmy again faces his first real-life major league strikeout victim, Royce Clayton of the Texas Rangers, who plays himself in this re-created scene.

“Rookie” is about having dreams and maintaining family values and about a relationship between a father and son. If you don’t have these things, the film suggests, you have nothing. These things are more important than winning. Who could argue with that? It’s the superb, athletic performance by the 48-year-old Dennis Quaid who makes story work. He looks like a major league pitcher of 35, in fact he looks a lot like Nolan Ryan. He puts his good stuff across the plate and makes it all seem logical that if someone can throw a fast ball at 98 mph he should be playing for a major league team, which is better than being…let’s say… a high school teacher. I can’t blame the movie for choosing the dream of being a baseball player over a teacher, that’s what most Americans would have picked. The movies are made for dreamers, while baseball because of many reasons, not the least of which is the greed of both the owners and players, has lost a great deal of interest with the public and the baseball dream is no longer pure. It’s only in the movies where such love of the game can be shown and not sneered at. 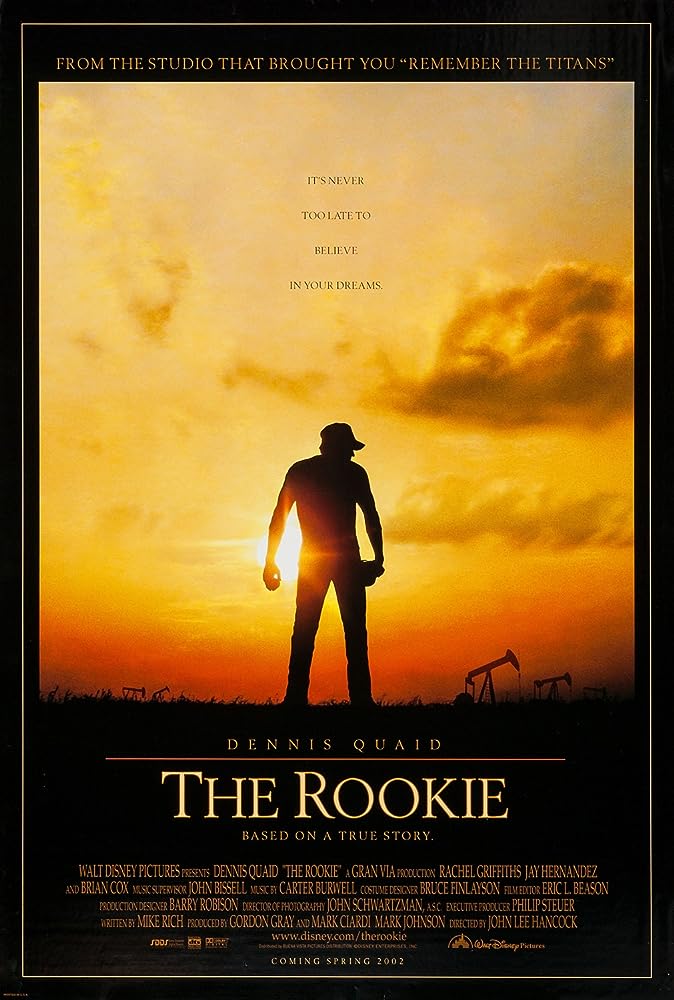