“It fascinates because it’s so offbeat, witty and provocative.”

Oddball, very British droll humored film by the architect Blackpool native Patrick Keiller (“London”), that is neither quite documentary nor fiction. It fascinates because it’s so offbeat, witty and provocative. Its aesthetic nature follows in the tradition of early Peter Greenaway. The ingenious film played the festival circuits to high acclaim and won the Tiger Award at the Rotterdam International Festival and was an Official Selection at both the Toronto International Film Festival and the Flanders (Belgium) International Film Festival.

Paul Scofield acts as the unseen invented anonymous narrator to the also unseen fictitious curmudgeon art professor, Robinson, who muses over the cultural, political and economic state of England. The friends will embark on 7 mini-voyages across England. The curious and chatty narrator accompanies the intellectual professor, who was canned from his previous job in London and is now stuck in a lower position in the provincial outskirts of London town of Reading (though he gets excited visiting the Abbey School in Reading where Jane Austen was educated and is gleeful to learn that the Abbey sits next to the jail where Oscar Wilde served the last years of his prison sentence). Robinson’s fortune changes when he’s employed by an unnamed ‘international advertising agency’ to investigate ‘the problem of modern England’ and goes on the search throughout England with the narrator pal.

There are generous references to such figures as: Daniel Defoe, Oscar Wilde, Jane Austen, Michael Portillo and Buckminster Fuller; it will also have historical classical structures share screen time with modern eyesores, industrial parks, supermarkets, universities, hotels, ports, malls, and shipyards. The film’s idea was to study the problems of England, as inspired by Daniel Defoe’s Tour Through the Whole Island of Great Britain (1724-6).

It opens with a quote by Oscar Wilde: “It is only shallow people who do not judge by appearances. The true mystery of the world is the visible, not the invisible.”

The unique film is intellectually pleasing, even if it has some soft spots that drag it down a bit. 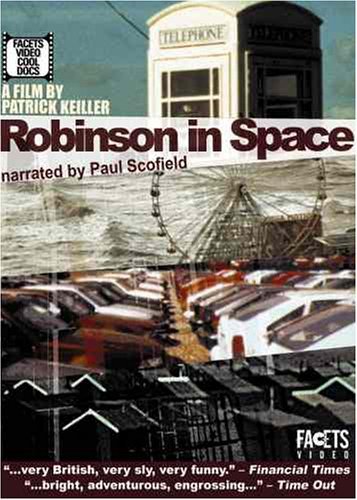