“Tries its utmost to be weird and aimless; and if that’s what rocks your boat, it ends up sort of hitting the jackpot for the chosen few.”

Abbe Wool, co-writer of Sid and Nancy, makes her directorial debut with this uneven, offbeat, nostalgia ridden counterculture road movie that tries its utmost to be weird and aimless; and if that’s what rocks your boat, it hits the jackpot for the chosen few. It might be most appealing to the left over hippie crowd from the Woodstock days and modern day deadheads chilling out over some contact with those of Gen-X who might have had a sniff of “flower power.” Even though for the most part this wannabe psychedelic Easy Rider film for the 90’s fizzles, I give it a marginal pass as a cult sleeper-keeper film because it had some spunk in its bumpy ride to El Dorado, was goofy fun, spot-on in being so unapologetic unfashionable, and a good tonic for those in need of an unconventional movie fix–especially late at night.

There are unremarkable but nevertheless diverting cameos by some of the film’s roadside prophets: Arlo Guthrie (offering good vibes as a hick service stop counter man who connects with the bikers because they bring back fond memories of his bike days in the 60s), Timothy Leary (offering as a friendly farmer free advice: keep an eye out for “transcendent reality – seeing in, seeing out”), David Carradine (offering the travelers some tunes, hits on his hookah and free sleeping bags), and John Cusack (a radical lone member of the “Symbionese” group offering free meals for the poor). The celebs seem to be enjoying themselves as they camp it up as eccentrics dishing out to the two bikers on their way to El Dorado in Nevada either nostalgia for the trippy 1960s or wake up calls for the politically apathetic Bush senior’s 90s.

Brooding, alimony paying, thirtysomething, nice guy Los Angeles factory worker named Joe Mosely (John Doe, co-founder and frontman of the LA punk rock band X) witnesses the death of a fellow biker Dave Coleman as he gets electrocuted while playing a video game in a bar. Dave’s last wish was to get lucky and visit a Nevada casino in the town of El Dorado. After he’s cremated, Joe pays for his funeral even though he just met the dude in the parking lot of his workplace; he then decides to honor Dave’s last request by skipping work and going by motorcycle to that unfamiliar casino mecca to scatter his ashes. On the road, Joe, who by the way is not the sharpest pencil in the box, realizes he doesn’t really know where he’s going and is not even sure if he got Dave’s wish right. But, I guess, there’s some fun to be had when a spaced-out, hero worshiping and obnoxious youngster, always asking ridiculous questions, named Sam (Adam Horovitz, the Beastie Boys’ Ad Rock), who we will learn later on is not on drugs but in a funk because his folks committed suicide one day after checking in with false names to a Motel 9, latches onto Joe and even though not invited just follows along on the motorcycle he just bought. The pesty Sam, who steals the pic (you either love or hate him), seems to get off whining in a Brooklyn accent, obsesses over staying only in Motel 9s–seemingly in a futile search for his parents or something else to return to that might give him false hope that things remain the same, and when checking out lighting off for no apparent reason I could figure out a Roman candle.

There are various characters met on the road: some spouting life lessons, some locked into bad trips, some drop-outs because of the country’s right wing politics and others just offering peace. Joe’s highlight is shacking up with free love advocate Labia Mirage (Jennifer Balgobin), an exotic dancer in Las Vegas, who has a heart of gold. After wandering around lost for most of the film, Joe accidentally finds out that the spot he’s looking for is in the town called Jackpot and El Dorado is the casino not the name of the town as first thought (slight fuck-up, no biggie!). What transpires when Joe reaches there seems to hardly matter (which might also go for this pic!), but it leaves off with a genuine fondness for the past as it intimates that it’s the journey and not the end that counts the most (OK, you probably heard that one before; but if you lighten up or light up, I think you’ll find that the film rocks).

It might not offer much in its whimsical story but it compensates with some quirky 60s philosophizing and frames its tale around a modern day clueless and alienated Don Quixote (John Doe) and Sancho Panza (Adam Horovitz) searching for something real and a way to overcome their aching loneliness. 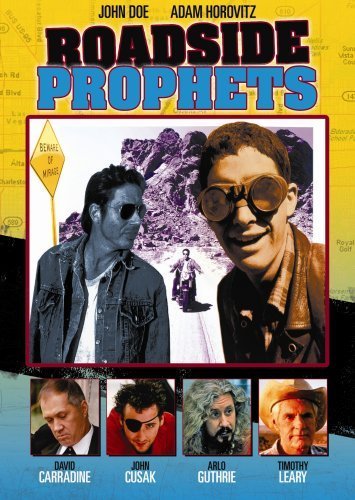