“Despite Whale’s usual great direction, it’s a diluted narrative without the punch that was intended.”

James Whale(“Frankenstein”/”The Old Dark House”/”The Invisible Man”) adapts the novel by Erich Maria Remarque to the screen hoping to make it a powerful anti-Fascist film warning of the Nazi dangers to humanity. It was a sequel to the author’s classic war drama ‘All Quiet on the Western Front’ (1930). The Nazi regime banned the novel. Despite mostly negative reviews upon its release, it was a top grossing film. Writers, warned by the studio, toned down the criticism of the Fascists and kept it too Hollywood to fully capture the author’s deeper dark visions. Despite Whale’s usual great direction, it’s a diluted film without the punch that was intended. This was no masterpiece, something Whale thought he could accomplish from such a great book.

When WW I is drawing to an end a group of German soldiers capture a French outpost just as the Armistice is signed. Returning home the soldiers must adjust to life back home after losing the war. The Kaiser flees the country. A mob attacks Tjaden (Slim Summerville), Willy (Andy Devine), Ernst (John ‘Dusty’ King) and Ludwig (Richard Cromwel) and tries to rip off Ludwig’s officer’s stripes. The men repel the mob. But find conditions have drastically changed in an angry Germany, and must adjust to a new way of civilian life. Murder, looting and mob violence becomes all too common. The country is going downhill, meanwhile it is seen preparing for another war.

The film was messy and seemed ham-fisted. It just never seemed to work right. 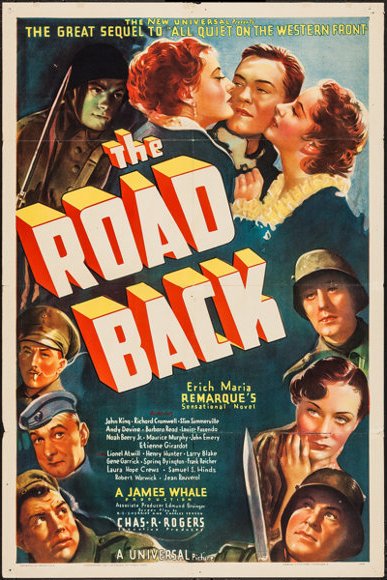